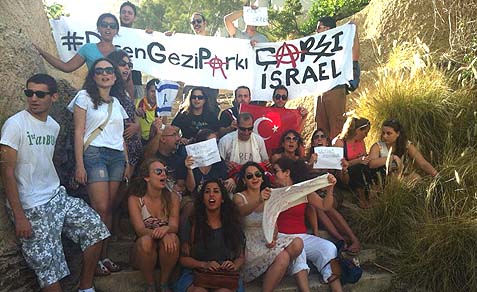 The Israeli tourists have stopped coming, journalists are being muzzled, alcohol banned and Turkish Jews see less and less of a future for their children.  As the Turkish Spring protests play out in Istanbul’s Taksim square Rachel Avraham interviews two Turkish-Israelis for the Jewish Press:

According to Eyal Peretz, chairman of Arkadash, an organization promoting the Turkish community in Israel, “The Jewish minority in a very extreme fundamentalist state is not a positive situation.
Of course a secular state is a much better situation for minorities. I
hope there will be a change soon.” He continued, “Many Jews made
immigration to Israel. I am sure if it will become worse, by Islamic
laws, we will see Aliyah to Israel from Turkey.” Peretz worries that
Erdogan is taking Turkey in the direction of Iran, by forbidding people
from showing affection in public and restricting alcohol consumption.

Peretz also claims that the atmosphere Erdogan created within Turkey is very problematic for Jews.
He explained, “You don’t see a future for your child. If you are old,
you will die in Turkey. When you are a young person with a small child,
you think, do I want my children to be raised in an Islamist state? You
will say no. You are doing it for the future, not the present. You don’t see the future. You don’t see your children raised in an Islamist state.
The community is becoming smaller and smaller; they don’t want their
children to marry Muslims and they are coming to Israel. I think Turkey
loses from that.”

Sivan Tfillin of the leader of the Kemalist Charshi Movement in
Israel concurred that Erdogan’s government has been bad for Jews,
claiming, “Erdogan is the one who ruined the friendship
between Israel and Turkey. Israeli people are now scared to go to
Turkey because of Erdogan. By the way, there are a lot of Muslims in
Turkey that are convinced that Israel is a bad country because of the
media. A lot of people that get to know me say Israelis hate Turks. […] Turkey is a really good friendof Israel and we shouldn’t let Erdogan ruin the friendship.”

Both Peretz and Tfillin expressed that Erdogan is trying to brutally suppress dissent. Peretz
emphasized that presently, Turkey has more journalists in prison than
any other country in the world , “more than Russia, more than China,
more than Iran.” This fact is confirmed by Freedom House,
which ranks Turkey as only partly free. He explained, “It says something
of this fragile democracy, if you could call it a democracy. I don’t
think a country that imprisons journalists is a democracy. People are
afraid that Turkey will become an autocracy or something worse, like
Libya or Syria.” Peretz complained that the Turkish people were barred
access to international media outlets.

According to Tfillin, “Two years ago, when the Arab spring started, I
was talking with my friends in Turkey and asked if the same will happen
in Turkey. It’s hard because every one is afraid of him. Some
journalists had to resign to because of Erdogan. After the Mavi Marmara, I have a friend who works in the news who said he can’t show any thing against him.
Erdogan controls the press. All of the Turkish channels are showing
shows and pop stars, not the protests. They don’t show anything except
for one. We only have facebook and twitter.” Given this, Erdogan is
responsible for the fact that Jews are now the main target of hate speech in the Turkish media, according to the Hrant Dink Foundation. Amid reports that the Turkish intelligence service has been spying on the Jewish community, relations between Turkish Jews and the government are at all-time low, according to the Algemeiner. The media is also to blame:

The relationship between the 30,000 or so Jews living in Turkey and
the rest of the Turkish population has become tense ever since the
relationship between Israel and Turkey began to deteriorate shortly
after the Mavi Marmara incident in 2010.  Anti-Israel sentiment is high
in the country, and anti-Semitism has also been on the rise at the
encouragement of Turkey’s Islamist government. A report in Al-Monitor quotes several Jews who fear a backlash against their community.

“As a Jew, I can attest to you there is a difference between being a
Turk and an Israeli,” Ediz said. “But whenever there is fighting
between Israel and the Palestinians, the atmosphere in Turkey turns
against us, and people start acting as if we committed a crime.”

Leri, another Turkish Jew, told Al-Monitor that the media is also to
blame. “The media is painting such an image that many won’t even
consider us human.”

According to the Al-Monitor article, the prosecutor’s office in
Istanbul that tried Israeli soldiers in-absentia for their role in the
Mavi Marmara incident asked the Turkish National Intelligence Service
(MIT) for a listing of Turkish Jews who traveled to Israel two weeks
before and after it occurred. These people were put under surveillance.
There are also allegations that  the MIT identified five Jews in Turkey
as suspicious, and that they expanded surveillance in Istanbul and
Izmir — where the majority of the country’s Jewish population lives.

While Turkey’s Prime Minister, Recep Tayyip Erdogan, has made
appeals to Turkey’s Jewish population to help mend the relationship with
Israel, there’s a sense among Jews in Turkey that he has put them in a
difficult and compromising position.

The Mavi Marmara being pulled out of Haifa harbour in 2010

Ahoy there! it’s the old Zionist witch-hunt again …. The Turkish authorities have found an excuse to brand their local Jewish community as disloyal: five Turkish-speaking Israelis in IDF uniforms. The Times of Israel reports:

Turkey’s National Intelligence Organization
(MİT) has launched an investigation of at least five Turkish citizens it
believes collaborated with Israel in the 2010 takeover of the
Gaza-bound ship Mavi Marmara, according to Turkish media reports.

MIT believes the suspects either assisted the
Israeli troops who boarded the vessel or later took part in the
interrogation of the ship’s activists in Israel, the Turkish daily Yeni Şafak reported on Friday.

A representative of Turkish Jews in Israel
expressed concern that the government in Ankara was targeting the
country’s Jewish community.

According to the report, the investigation was
launched after flotilla participants testified that they heard some
Israeli soldiers speaking Turkish during and after the raid.

Israeli naval commandos commandeered the Mavi
Marmara in May 2010 to enforce a naval blockade of the Gaza Strip. The
troops killed nine Turks after they were attacked by violent activists
in clashes on board.

Uğur Yıldırım, an attorney with
the Istanbul-based Humanitarian Relief Foundation (IHH), which organized
the flotilla, was quoted in another Turkish daily, Zaman, as saying
that during the interrogation of passengers on the boat after it had
been brought to port in Israel, several Turkish citizens, wearing IDF
uniforms, confirmed that they had been brought in to act as
interpreters.

Another IHH lawyer, Gülden Sönmez, said
the organization has pictures and videos linking certain Turkish
citizens to the raid. “We have delivered all these to the prosecutor’s
office,” she told Zaman.

While the report did not specify that
the MIT was targeting the Jewish community, it did state that the
investigation centered on Istanbul and Izmir, two cities with
significant Jewish populations.

With Israeli-Turkish relations at an icy low, the news that the rock band Orphaned Band are taking out Turkish citizenship seems a bold compliment to their Turkish fanbase. But it’s not creeping dhimmitude, unless they relinquish their Israeli passports. Report in the Times of Israel:

Orphaned Land’s progressive metal riffs have won them a solid fan base in Turkey, even as relations between Jerusalem and Ankara have soured in recent years.

On Tuesday, the Turkish website Turk News reported that the band’s members would become citizens in time for their next show in Turkey in September.

“I hope the process will run properly and Orphaned Land will be in their second homeland, Turkey, as Turkish citizens for the next concert,” the band’s manager said, according to the website.

The band, which mixes Jewish and Arab liturgy with modern rock music, claims to have fans across the Arab world. The band plays several times a year in Turkey, and fans from Arab countries that Orphaned Land can’t enter come to see them there.

In March, Turkey awarded the band the Peace and Friendship Award, with symbols of Turkey, Israel, Judaism and Islam.

“Our tour in Turkey was amazing, supported by a great audience as always and it is for a good reason that Turkey is always described as Orphaned Land’s second home,” vocalist Kobi Farhi said at the time.

Relations between Israel and Turkey have been icy since 2010, when Israeli commandos killed nine Turkish citizens aboard a ship trying to break the Gaza blockade. Turkey has demanded an apology, which Israel has refused to do, saying its soldiers acted in self defense.

The Jerusalem Post profiles two Turkish Jews, now making new lives for themselves in Tel Aviv. (With thanks: Albert)

By 6 p.m., the Choco-Latte cafe on Rehov Idelson in the heart of Tel Aviv is relatively quiet. The bright orange chairs on the glassed-in patio are empty, apart from one older gentleman in the corner who is savoring his second strawberry pastry and two girls inside on a retro couch sipping coffees.

“By this hour, things start to wind down,” says Jackie Tsvi, 28, a Turkish immigrant who co-owns the caf with his friend and partner, Vedat Bahar, 30.(…)

Friends since childhood, Bahar and Tsvi grew up in Istanbul in the Jewish community but like many in the assimilated community, attended regular schools. Tsvi studied media and communications systems at the University of Bilgi, finishing his B.A. in 2002.

Bahar taught Zionist classes in the Jewish community, but says he chose to make aliya because he couldn’t see a future in Turkey. “The Jewish community in Istanbul is very wealthy and snobby,” Bahar explains. “I’m not like that, and I wanted a chance to do something else with my life so I came to Israel.”