Most people are unaware than major classic Jewish works of the Middle Ages were originally written in Judeo-Arabic (Arabic using Hebrew characters).  Fascinating article on Chabad.org:

Although current relations between Jews and some Arabic-speaking
countries are a bit strained, to say the least, it was not always so. In
fact, there was a time when most Jews lived in Arabic-speaking
countries, and thus many Jewish books were written in Arabic—or to be
more precise, Judeo-Arabic, which was either the Jewish dialect of
Arabic or classical Arabic written with Hebrew letters. Most of these
works were later translated into Hebrew and other languages, becoming
foundational Jewish classics—to the point that many people are unaware
that these works were originally written in Arabic.

Here are seven such works: 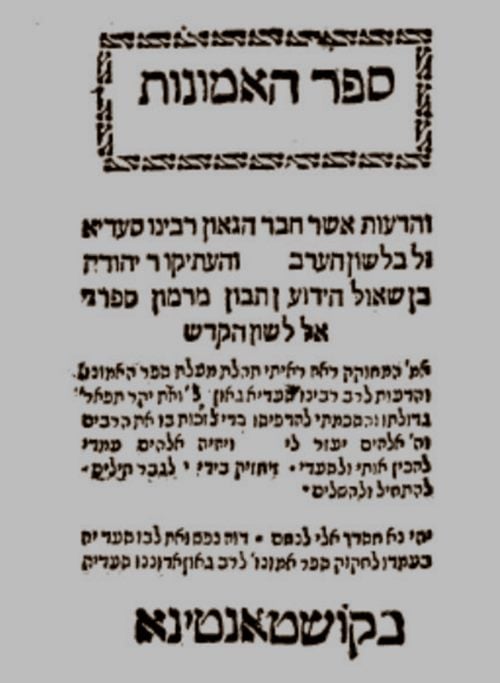 Rabbi Saadiah Gaon (Saadiah ben Joseph Al-Fayyumi) was born in Egypt; served as gaon and head of the yeshivah
in Sura, in present-day Iraq; and died in the year 942 C.E. He was one
of the first rabbis to write extensively in Arabic, and is considered
the originator of Judeo-Arabic literature. He is best known for his
magnum opus Emunot V’deiot (“The Book of Beliefs and Opinions,”
or its longer, more complete name, “The Book of the Articles of Faith
and Doctrines of Dogma”), which he completed in the year 933 C.E. Rabbi
Saadiah Gaon wrote this work after seeing the confusion and ignorance
among many of the Jews about their own faith. It is the first systematic
presentation and philosophic foundation of Jewish thought and dogma.

He also wrote works on many other topics, including Hebrew grammar,
Jewish law, and polemics against the Karaites. Additionally, he wrote a
translation of Scripture into Arabic, with a very valuable commentary.
This masterpiece is called Tafsir. 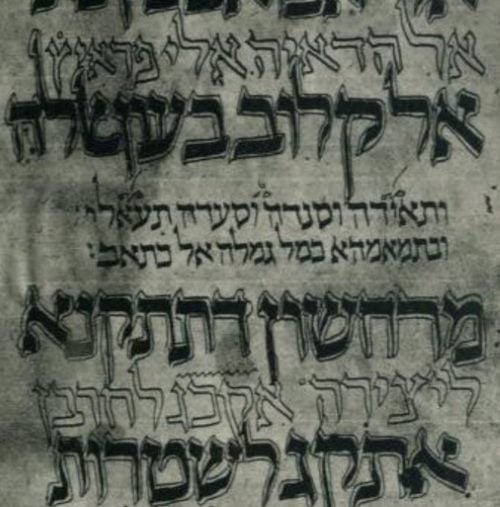 Not much is known about Rabbi Bachya ben Yosef ibn Paquda, other than that he lived in 11th-century Spain and served on the rabbinical court there. He is famous for his work Chovot HaLevavot,
“Duties of the Heart” (or as it was originally entitled before being
translated into Hebrew, “Book of Direction to the Duties of the Heart”).
Rabbi Bachya, or Rabbeinu Bachya, as he is more commonly known, writes
that he wrote the book after observing that many Jews paid attention
only to the outward observance of Jewish law, “the duties to be
performed by the parts of the body,” without regard to the inner ideas
and sentiments that should be embodied in this way of life, “the duties
of the heart.” As such, Chovot HaLevavot deals with commandments based on the mind and emotions, such as thinking about the unity of G‑d, love of G‑d and trust in G‑d, but also hypocrisy and skepticism, humility and repentance.

Like the other works mentioned here, Chovot HaLevavot has
become one of the foundational works of Jewish ethics and has been
translated into many languages, including Hebrew, Latin, Judeo-Spanish,
Italian and English. 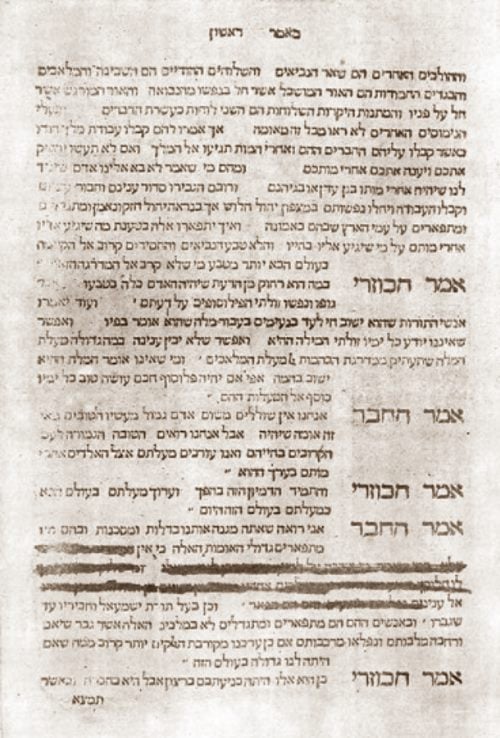 Censored page from the first edition of The Kuzari, Fano, 1506 (in the possession of George Alexander Kohut, New York).

Rabbi Yehudah Halevi was a 12th-century Spanish Jewish physician,
poet and philosopher. Throughout his life, Rabbi Yehudah dreamed of
settling in the Land of Israel.
He coined the famous phrase “My heart is in the East, but I am in the
farthest West.” Toward the end of his life he set out for the Holy Land.
Legend has it that upon reaching Jerusalem and beholding the Temple
Mount, he rolled on the ground in ecstasy and composed “Tzion Halo
Tishali.” At that moment, an Arab horseman saw him and trampled him to
death. “Tzion Halo Tishali” is sung to this day as part of the Kinnot
elegies traditionally recited by Jews throughout the word on Tisha B’Av to mourn the destruction of both the First and Second Temples in Jerusalem.

Rabbi Yehudah Halevi is best known for his masterful work The Kuzari, or as it is fully entitled, “The Book of Refutation and Proof on Behalf of the Most Despised Religion.” The Kuzari
is structured as a dialogue between a rabbi and the king of Khazaria (a
country located in present-day Russia and Ukraine), covering topics
such as the fundamentals of Judaism, prophecy, the afterlife, the land
of Israel, the Hebrew language, the benefits of communal prayer, the Sabbath, astrology, and determinism vs. free will. The Kuzari is a timeless classic and and is regarded as one of the most important polemical and apologetic works of Jewish thought.

Born in Cordoba, Spain, in the year 1135, Rabbi Moses ben Maimon, the RaMBaM—or
Maimonides, as he is commonly referred to—was a philosopher,
astronomer, and physician to the court of Sultan Saladin in Egypt, and
is perhaps the most famous of the Jewish scholars listed here.
Maimonides was a prolific writer, and at the age of 16 authored Millot HaHiggayon
(“Treatise on Logical Terminology”), a study of various technical terms
that were employed in logic and metaphysics. Although his magnum opus,
the Mishneh Torah,
in which he gathered and codified all of Talmudic law in an orderly and
systematic fashion, was written in Hebrew, most of his other works were
written in Judeo-Arabic. 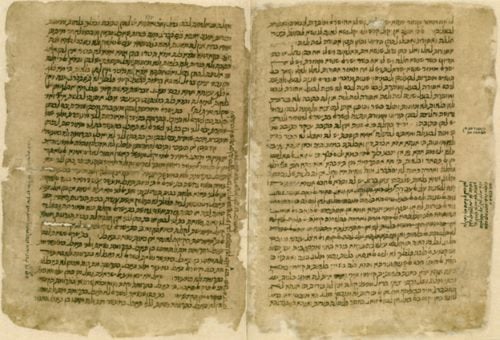 Maimonides’s handwritten “Commentary on the Mishnah” (Yevamot, ch. 9) in Judeo-Arabic script. Includes notes by his son Abraham in the margin.

At the age of 23,while fleeing with his family from the Almohads (a
fundamentalist Muslim dynasty that took over Cordoba),Maimonides started
his commentary on the Mishnah, a massive work written in Arabic and
subsequently translated into Hebrew by the famous ibn Tibbon family. In
it he not only explains each mishnah, but also includes important
background information such as a record of the transmission of the Oral
Law to the leaders of each generation and an articulation of the 13
fundamental beliefs of Judaism.