Fascinating article in Ynet News about a Jewish IDF soldier whose family still lives in Casablanca. The Moroccans he grew up with and the Arabs he is fighting are not the same, he says.

Suddenly the meaning of the mysterious
phone calls her husband was receiving over the past few weeks became
clear. The family sat around the living room for several hours,
listening to IDF stories told by A., who had just come from active
operational duty in southern Israel.

A.’s family lives in a third-floor apartment in central Casablanca,
Morocco’s largest city. Only about 2,000 Jews remain from what was once a
large and proud community. A.’s neighborhood, which is near Boulevard
D’anfa, one of the city’s main boulevards, is marked by shaded streets
and well-kept buildings. Their apartment is spacious. The light
emanating from beyond the colorful crystal chandeliers highlights photos
of the family and of the rabbis Ovadia Yosef and Chaim Pinto. The
living room has two seating areas, one old and one Moroccan-styled. The
large kitchen has stacks of carrots, potatoes, beets, zucchinis,
coriander, and strawberries. The holiday cooking is in progress, and
like most Jewish families, A. is using the services of a local young
woman who comes in every day. The family members speak French among
themselves. A.’s two younger sisters, who are 11 and 15 years old, study
at the same Jewish school that A. attended. 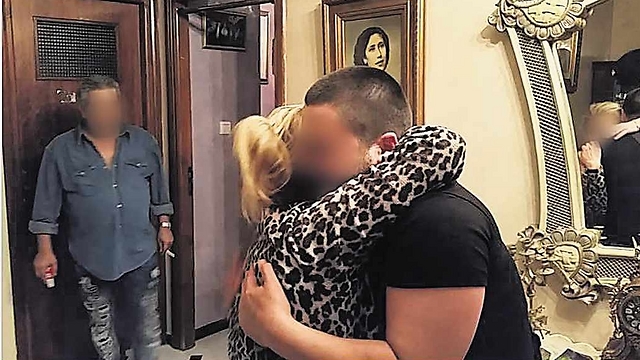 The soldier on leave greets his family in Casablanca

It’s a warm, happy family, with a special, fun, manner of
interaction. A. himself turns out to be a charismatic, generous, clever
guy, who admires the IDF. He still doesn’t have complete command of
Hebrew and his fellow soldiers poke fun at the mistakes he makes. In
Israel, he lives with two roommates, both of whom are also lone
soldiers. He also sees his girlfriend when he’s on leave. His older
sister, 25, moved to Israel before A. and earned a master’s degree in
microbiology. She married a Jewish man who moved to Israel from
Martinique, so A. isn’t completely alone in the country.

The move to Israel and the IDF enlistment gave A. a chance to go on a
new path, after feeling a bit lost. “When I finished school, I didn’t
really know what to do. I helped my dad with his business a bit, but I’d
go to sleep late and get up in the afternoon each day. I was bored,
everything I wanted was done for me. When I wanted a glass of cola, I
asked the maid. I didn’t give my parents a lot of reasons to be proud
before. I wasn’t an excelling student, and all I was interested in was
soccer. Ever since enlisting, I feel like they’re really proud of me.”

We go for a walk in the ‘medina’, the city’s ancient market, which
consists of a bunch of crowded streets at the city’s center, surrounded
by a wall. There are lots of souvenir stalls and shops for pottery,
carpets, glass and leather at ridiculous prices. Buyers are welcome,
even expected, to bargain, and often a deal is forged over cups of sweet
tea with lots of mint. During our walk around, A. runs into
acquaintances and childhood friends, who excitedly respect the fact that
he is an IDF soldier. They converse in French, and A. is not afraid to
translate into Hebrew. “In any case, Moroccan Muslims know how to
identify who is Jewish or not,” A. explained. “One could say that our
Jewishness is written on our foreheads.”

Indeed, shopkeepers try to tempt us to inspect their wares with
greetings of ‘shalom‘ and ‘baruch haba’ (welcome in Hebrew – ed.). A.’s
family say that there are almost no signs of anti-Semitism in
Casablanca. The Jews enjoy the protection of King Mohammed VI, the
authorities are able, at least for now, to deal with the threat of
radical Islam, and Passover prayers at the synagogue were secured by
police. Contact between Jews and other Moroccans is, of course, a daily
occurrence.

The young Muslim at a shawarma shop is entirely familiar with Jewish
dietary customs. Neighbors, family acquaintances, neighborhood business
owners are happy to meet A., and it seems that everyone is aware that he
has spent the last year and a half in Israel.

He himself is careful to distinguish between the Muslims with whom he
grew up and with the enemy he fights as an IDF soldier. “It’s not the
same,” he says emphatically. “I do not hate Arabs. These are people I
grew up with, and most Moroccans I know do not care about the
Palestinians. But my job is to defend my country against enemies who
want to destroy it,” he said.