Born as Rouleen
Abdullah in Alexandria, Dina Ovadia didn’t know she was Jewish
until the age of 15. She moved to Jerusalem with her family, but angered
Cairo when she joined the ‘occupation’ army. Now she has been stripped of her Egyptian citizenship. Ynet News reports:

Egypt’s Prime
Minister Sherif Ismail has decided to revoke the Egyptian citizenship of
22-year-old Dina Ovadia from Jerusalem because she moved to Israel and
joined the IDF.

When she was 15, an incident happened that turned her life upside
down. “I was at home with my mother and brothers, and all of a sudden
bearded thugs stormed into our apartment,” she told the IDF journal.
“They were Salafists, radical Muslims. They fired into the air and
warned us to leave Egypt immediately. 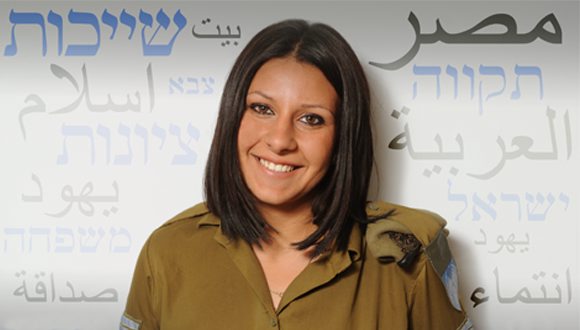 “In all the commotion I heard them call our apartment ‘Bayt
al-Yahud’ and I didn’t understand what they were talking about. Only
after they left, my grandfather sat us, his three grandchildren, for a
talk and told us we were Jewish.

“It was hard for me to comprehend this, because at school we were taught to hate the Jews.”

The family left Egypt in a hurry and found a home in Jerusalem.

Ovadia joined the IDF and served in the IDF Spokesman’s Unit.
Shortly before her release, she was even recognized by the unit as an
exceptional soldier.

After receiving the prize, she was interviewed for the IDF journal and filmed a video of herself telling her life’s story.
“My biggest dream,” she said in the video, “is to visit Egypt
wearing uniform, tell them my truth about Israel, and declare: I’m
Jewish, and I’m proud of it.”

Ovadia’s interview and video caused outrage in Cairo, which
reached its climax on Monday when the well-known TV personality Ahmed
Moussa attacked “the country of the Zionist murderers” on air, and
revealed that the Egyptian prime minister decided to revoke Ovadia’s
citizenship.
“This is the first time in history that an Egyptian woman serves
in the occupation army,” said Moussa, who failed to mention Ovadia was
Jewish.
Ovadia, who was released from the IDF a year and a half ago, is
currently studying international relations at the Hebrew University in
Jerusalem.

“It’s shocking, and a low blow, but I don’t want to stoop to
their level,” she said on Monday. “As far as I’m concerned, they should
know I’m first and foremost a proud Jew and Israeli, and only then an
Egyptian. Every additional word I say will be twisted in Egypt and used
against me.”