Writing in the Jerusalem Post, Judit Neurink pleads for Kurds to preserve their links with Jews and Kurdistan’s Jewish heritage, such as Nahum’s shrine at al Qosh. (An astonishing number of Kurds have Jewish grandmothers). But beyond admiration for Israel, Jewish heritage and stories are almost all forgotten. 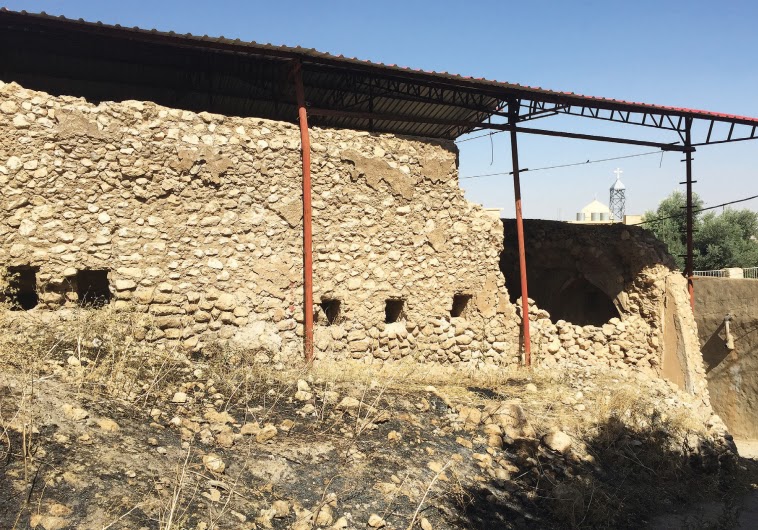 The partially ruined remains of the tomb of Nahum at al Qosh (Photo: Seth J Frantzman)

Jews in Iraqi Kurdistan – where Al Qosh is situated from a
geographic point of view, although politically it is part of the Iraqi
government of Baghdad – were very much part of the fabric of the
society. They were mainly farmers and craftsmen, living side by side
with the Kurds, and in the process taking over many of their habits.
Although intermarriage was not common, friendships were.

When I
did the research for my novel The Jewish Bride, trying to understand
how closely knit the society was before the ‘50s, and why almost all
Jews had left Kurdistan by the end of that same decade, I was impressed
by those friendships.

An old judge remembered his childhood
friends, whom he had joined after play at home for dinner. He spoke
with almost palpable pain about the moment they left for Israel, and he
realized he would never see them again. The head of an influential
Kurdish family told me about the life at the centuries-old citadel of
Erbil, where the star of David above the door of the old hammam (Turkish
bath) still tells us about the mix of people living there.

The
society was so close-knit that many Jews did not want to leave it. They
preferred to stay in Kurdistan instead of leaving for a country they
did not know, a difficult environment where they would have to start
from scratch – as they had been told by those idealists who had already
made the journey. That’s why probably thousands chose to convert to
Islam – if even only for the eyes of the outside world – to be able to
stay.

I found families that still hold lively memories of their Jewish grandmother.

When
I make presentations on the subject for Kurdish groups, young people
come to me and tell me privately about their Jewish roots. Some of them
would ask me for details, as most of the knowledge of this important
chapter of the history of Kurdistan has been lost.

I even found a
family that still spoke the old Aramean language, the local Targum,
between themselves. When the last group of converted Jews left for
Israel in the Nineties, they were somehow passed over.

And once I
got myself really started on the subject, I found out that even some
of my Kurdish friends had Jewish roots, about which they never talked
in public.

Some had children who left for Europe to try to catch
up with these roots, yet never discussing it with other Kurds for fear
of reprisals.

Kurdistan is still part of Iraq, and sandwiched
between Arab countries that have no love for Israel. Local radical
Islamic groups have fed on years of poverty and neglect, and are
adamantly anti-Jewish.

Yet at the same time, the ruling Barzani
family is known to have strong personal links to Israel, with both
president Massoud Barzani and his father Malla Mustafa visiting old
friends that had left their Barzan village in Israel.

And it is
known that when the Jews left in the ‘50s, many Kurds looked at them in
admiration: they were setting up their own state, and thus fulfilling a
dream that many Kurds shared.

In present-day Kurdistan, the Jewish heritage and its stories are almost forgotten.

Many
Kurds still look at Israel as an example for their dreamed-of
statehood, and whisper about military training received from Israelis
in the Eighties and Nineties. And they absolutely love it when American
Jews visit their lands, showering them in attention.

But Islam
has left its mark, and until recently many did not wish to be
confronted with the Jewish heritage of Iraqi Kurdistan. When I beg
Kurdish youth to research their past to find out more about for
instance the Jewish house of Adiabene that ruled the area some 2,000
years ago and had its capital in Erbil, they shy away from it, thinking
the subject could get them into nothing but trouble.

Yet with
the violence of Islamic State (IS) having put off many, change is slowly
on the way. On the one hand it has resulted in Kurds turning away from
Islam and opening up their minds to the modern world, on the other it
has driven the more radical groups and parties into the defensive,
vowing that IS is misusing Islam. The gap between the religious and
secular Kurdish worlds has never been so big before.

My friends
with Jewish roots show fear of the radical elements in the society, yet
at the same time the opening up of the rest is offering opportunities.

It
could allow young people to admit to their roots, and more importantly
it could open up the possibility of the Jewish heritage of Kurdistan
becoming a subject of research. The latter is badly needed, as 3,000
years of history is about to be lost.

Not only the Kurdish
government, that is too busy surviving the military attacks by IS and
the political ones by Baghdad, should work on this. It needs a push, a
gentle hand to stimulate it to get started.

For instance by
helping with the reconstruction of the Al Qosh synagogue, and the old
Jewish quarters in Erbil and elsewhere in the region, that will crumble
soon if nothing gets done. Or by offering students scholarships if
they focus on researching the Jewish past.

Of Kurdish barbers and Jewish converts