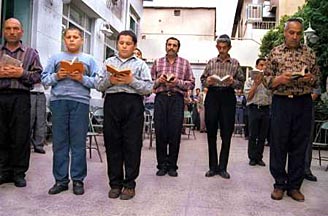 We don’t need your New Year greetings, Iran. Put your money where your Tweets are! Michael Rubin blogging in Commentary tells Iran to come clean and tell us what happened to its missing Iranian Jews (with thanks: Eliyahu):

Iran’s new foreign minister Mohammad Javad Zarif eventually took credit
for the Twitter stunt. By doing so, he not only seems to guarantee
himself an appointment at Princeton or Harvard should he ever end up on
the foul side of Supreme Leader Ali Khamenei, but he appears to be
pushing a strategy that Rouhani and former Khatami-era spokesman
Abdollah Ramezanzadeh once bragged about:
Speak softly until the West lowers its guard, and then use the easing
of pressure to push forward with Iran’s own special projects.

Perhaps I’m being too cynical, having studied for too long patterns
of Iranian deception for a chapter of my forthcoming book. So, it would
be nice if those willing to grasp Iran’s outstretched hands would ask
Zarif, Rouhani, and the true leadership of Iran—Khamenei and Gen. Qasem
Suleimani—to resolve the problem of Iran’s missing Jews.

During the 1990s—the reign of “pragmatist” Rafsanjani and “reformist”
Khatami—security forces arrested several Jews who sought to flee Iran
into Pakistan. Several were spotted subsequently in Iranian prisons.
Here is the Simon Wiesenthal Center action alert from several years ago:

Between 1994 and 1997, 11 Jews, at the
time ranging from 15 years of age to 57, were detained while attempting
to cross the border from Iran into Pakistan seeking to be reunited with
their families and in hopes of finding a secure future and a life of
freedom. In addition, in February 1997, a Jewish businessman living in
Tehran disappeared while visiting a provincial capital and has not been
heard from since. The families of the disappeared have been virtually
unable to get any information from the authorities as to the whereabouts
of their loved ones. Several eyewitnesses (former Iranian intelligence
officials who are now living in the West) claim they have seen some of
the missing in Iranian jails and others in a detention center, but to
date nothing has been substantiated. Several years ago, two credible
Iranian officials privately assured a family member in Iran that the men
were alive and had been transported to a prison in Tehran.

The appeal was delivered to Zarif while he was still Iran’s
ambassador to the United Nations. While it’s all well and good to
applaud Zarif’s tweet, perhaps those who are seeking to draw broad
conclusions from it might consider demanding the new government put its
money where its tweets are, and come clean about what they have done to
the missing Jews.