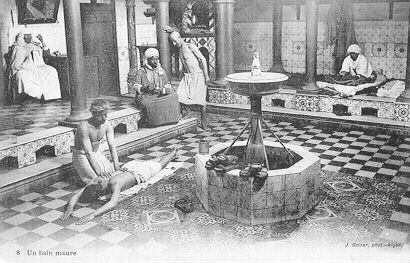 Was there or wasn’t there a mikveh (ritual bath)  in Algiers? Apparently one was built in the late 1950s at the behest of chief rabbi Fingerhut, who came from Strasbourg to run the La Bouzareah Yeshiva between 1955 – 60.

The Jewish women of Algiers evidently took coexistence with their Muslim neighbours seriously: they had a bath set aside for them in the Moorish Baths near the Bab el Oued market. But according to a little snippet from Infojuive (May/June 2013), the Consistoire (the French-based authority which ran the Algerian Jewish community) determined that the Jews of Algiers should have their own mikveh.

Infojuive says that the new mikveh was built by an Italian builder friend of Joseph Dahan, who had once asked him for a jerrycan of petrol for his van when he was going through tough financial times. The Italian builder was himself indebted to Dahan and began constructing the mikveh in a small courtyard adjoining the synagogue on the rue de Dijon.

The mikveh was finished in 1958 when it was officially opened. It was little used, however. Who could blame the good Jewish women of Algiers – they probably much preferred the steamy atmosphere of the Moorish baths.

In any case, within three years, the Jews of Algeria had begun their mass exodus.