Diarna has an exclusive interview with Ruth Pearl. It’s not always audible, but it’s the first time that the mother of the beheaded reporter Daniel Pearl has spoken on the record of her childhood in Baghdad.

A recurring nightmare haunted Ruth Pearl (nee Rejwan) 20 years after she survived the Farhud pogrom in 1941: even after she had had her children, she imagined she was being pursued up the stairs of her home by a Muslim with a gun.

This would not be her only nightmare: Ruth’s son Daniel, a reporter with the Wall St Journal, would fall victim to Islamist kidnappers in Pakistan.

For a child of only six, Ruth remembers quite a lot about the Farhud in which 179 Jews were killed and many more injured. She remembers hearing stories of shops being looted. On the way to fetch a cigarette for her father she saw a wounded looter, whom the Muslim neighbours were not interested in helping: in fact the Muslim neighbours had put the rioters off attacking her family’s home. “There are no Jews here”, the neighbours had told them.

The family sheltered in their cellar from bombing by German and British aircraft: the Nazis and the British were engaged in a war for control over Iraq in the month before the Farhud. Of all the areas where Jews lived, it must be said that Bataween, a prosperous, modern district of Baghdad, was least affected by the Farhud. Compared to Takht-el Takia and Bab-el Sharq, the old Jewish quarters, there were few Jewish casualties in Bataween. But there was shooting, and Ruth remembers seeing two bullet holes in her house, which narrowly missed the residents.

The person who popularised the term ‘dhimmitude’ to describe the submissive attitude of non-Muslims, is a slight, fragile, shy Jewish refugee from Cairo calling herself ‘the Daughter of the Nile’. Mordechai Nisan reviews Bat Ye’or’s latest work in Front Page Magazine: Understanding Dhimmitude, a compilation of 21 talks and lectures.

With her five major books in hand, and a growing reputation as a
woman of courage and truth, with a call for justice for the defenseless
dhimmi victims of Islam, Bat Ye’or lectured in a variety of forums in
Europe, America, Canada, and Israel. She was consistently forthright
and precise, teaching and warning. The major themes that Bat Ye’or
expresses and explains in her lectures can be summarized as follows:

While historian Georges Bensoussan refers to a history of
“conviviality and contempt” to describe the fantasy and reality of
Muslim relations with non-Muslims over 14 centuries, Bat Ye’or shows a
canny insight into the intricacies and interconnections touching this
complex subject.

My traumatic flight from Egypt

Alexander Yakobson’s encounter with two unsmiling Syrian Jews convinced him that self-determination is what ill-treated Jews and Palestinians of the region deserve. A moving piece in Haaretz:

During
the 1970s, while I was learning Hebrew at an ulpan in Jerusalem, a
brother and sister from Syria joined our class. They were both around 13
or 15 years old; the brother was taller and older than the sister.
Someone said they had been smuggled into Israel through Lebanon, by the
Mossad.

There
was something strange about them: they never parted, and they never
smiled. They stuck together throughout the many months of the ulpan
class, never once with a smile on their face. This was very odd. Most of
the other students were like me, youths from the Soviet Union. We came
with our parents from that anti-Semitic country and its oppressive
regime. I was familiar with Russian anti-Semitism from personal
experience. But none of us looked like these Jews from Syria. Not at
all.

A
few months after ulpan had finished, I met the brother elsewhere. He
was alone, without his sister. He smiled at me and said “Hi Alex, how
are you?” The words were quite ordinary, but my feeling wasn’t. I
haven’t seen them since, but I haven’t forgotten them.

Over
the years I was reminded of them whenever Arab Knesset Members made the
pilgrimage to Damascus, showering praise upon the Assads, both the
father and son. Azmi Bishara did this quite a lot, but he wasn’t the
only one. MK Abdulwahab Darawshe once said, upon returning from
Damascus: “If only the Arabs in Israel enjoyed the same conditions as
the Jews in Syria.” Indeed, I thought, there might be quite a few
supporters for this idea in the Jewish public. 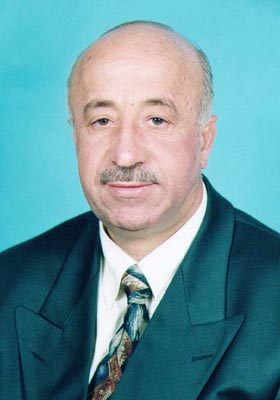 MKs Abdulwahab Darawshe (above) and Azmi Bishara (left):”if only the Arabs in Israel enjoyed the same conditions as the Jews of Syria”

A
few years ago, I participated in an Israeli-Palestinian encounter. The
young Palestinians taking part made the familiar claim – that the
Palestinian people are paying the price for European Anti-Semitism. I
was reminded them that half of Israel’s Jewish population originated in
the Middle East, not in Europe. The usual historical ideological
arguments ensued. In the end, I said I wanted to share a personal story,
and I told the story of the brother and sister from Syria, with the
smile and the “How are you?” at the end. Silence spread through the
room. No one questioned my story’s authenticity. Finally, one of the
young Palestinians sighed and said,

During
the coffee break, one of the young Palestinians approached and asked
me, “Do you know what happened to that young man?” “No,” I replied, “I
lost touch with him. I suppose that all is well and he just became
Israeli.” That was a surreal moment, in a positive sense: it was obvious
that the young Palestinian was pleased to hear that the Syrian Jew had
become Israeli.

A different story of displacement, by Matti Friedman

Film-maker Mohsen Makhmalbaf  (as reported in Ynet-News), is already paying the price for his visit to Israel: the Iranian regime has frozen Makhmalbaf out of the Iranian cine-scene, although the setting for his film ‘The Gardener’, the Baha’i gardens in Haifa, would likely have been enough to make him persona non grata. In other news of positive developments between Iranians and Jews, I’m mentioning two books of Jewish interest by non-Jewish Iranians:

Mohsen Makhmalbaf is the
most senior Iranian to officially visit Israel. During his visit, he
held a meeting with journalists and film critics in Jerusalem and told
them he was the first Iranian director to allow a commercial screening
of his film in Israel. he added that he was breaking a taboo and hoped
others would follow in his footsteps.

“We have to get to know each other through art, literature and
cinema, so we can become friends and end the hostility. That’s the
reason I filmed my latest movie, ‘The Gardener,’ in Israel. I hope
Israeli filmmakers will be able to shoot films in Iran,” he said.

In a candid interview to Yedioth Ahronoth on the eve of his
arrival in Israel, the veteran director expressed his hope for peace and
a change in his homeland, and praised Israel and the Israelis.

“In a previous secret visit here, I looked at the faces of young
Israelis and saw the faces of my children and their friends,” he said.
“I thought I was coming to a military country but discovered a democracy
instead.”

The Iranian authorities, however, were quick to respond to the
positive public and media buzz created by the Israel visit. The official
Iranian cinema association declared a full boycott on all of the films
made by Makhmalbaf, who left the Islamic Republic in 2005 after the
election of Mahmoud Ahmadinejad
as president.

The cinema organization ordered all museums and cinema to erase
every single memory of the famous director and boycott him forever.

Senior Iranian officials referred to Makhmalbaf as a “rootless and soulless
man” following his visit to Israel. The official Iranian news agency
called him a “traitor.”

But while some Iranian academics and artists condemned Makhmalbaf
over his visit to Israel, a group of journalists and artists published
an open letter praising him for his courage. A village in Daghestan (photo: Reuters)

Antisemitism is suspected as the motive for the shooting of a Chabad rabbi in the Muslim republic of Dagestan. Since this report appeared in the Jerusalem Post, the rabbi has been flown to Israel for treatment: (with thanks: Anonymous reader)

Update: The President of Dagestan has blamed the attack on one of the most extremist Islamist groups operating in the Chechnya-Caucasus region (The Algemeiner)

Rabbi Ovadia Isakov, 40, an emissary of the Chabad-Lubavitch hassidic movement,
was shot and seriously wounded in Derbent in the Republic of Dagestan on
Thursday.

Isakov, identified as chief rabbi of Derbent by Chabad sources,
was wounded in the lung after being shot from behind by an unidentified
assailant not far from his home.

The attack took place as the rabbi
exited his car to enter his home in the predominantly Muslim republic.

He
is currently in intensive care and reported to be on a
respirator.

Russian Chief Rabbi Berel Lazar has made arrangements to fly
Isakov to Israel for further treatment “as soon as his condition stabilizes,”
according to Chabad’s website.

The website also reported that Russian authorities believed the attack might
have been motivated by the rabbi’s Jewish appearance. Police said they were
considering “religious motivations” but were exploring all leads.

The
rabbi’s house had been vandalized in 2007.

Dagestan, a republic of
Russia, has a history of Islamic insurgency and has served as a battleground in
clashes between Chechen rebels and federal troops.