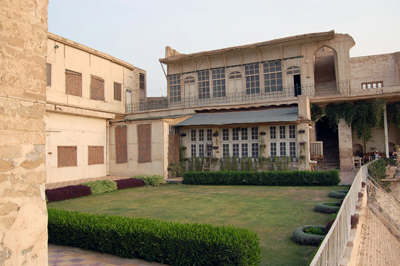 This elegant villa belonged to the Jewish Shashoua family:  property or heritage?

If you wish to read articles critical of the ongoing campaign to raise awareness of Jewish refugees from Arab countries, look no further than Haaretz. Writer after (usually, leftist) writerbashed last’s autumn’s Foreign Ministry drive to put the question  of Jewish refugees on the map. But Avi Shilon’s critique is different – he works for the Netanyahu-supporting Israel Hayom, and has written a biography of Menahem Begin. My comments are interpersed in italics (with thanks:Lily):

An advertisement has recently been
broadcast on television in which entertainer Yossi Alfi encourages Mizrahim
‏(Jews of Middle Eastern origin‏) to tell their stories for the sake of the
historical record. But beneath the welcoming title, “And you shall tell your
son,” hides a program with historic implications that are hidden from the
public eye.

Those who view the ad are invited to visit
the website of the Pensioner Affairs Ministry and tell their stories. At first
glance, this seems moving and justified: Just as it is important to document
the heritage of the Jews of Europe, it is proper to document the history of
those who came from Muslim countries.

Yet people who enter this site and seek to
document their stories encounter a surprise: a bureaucratic form that instructs
them how to file a claim for property in their countries of origin that was
stolen from them when they emigrated to Israel. This week, apparently due to
complaints, the section of the form that deals with documentation was given
more prominence. Yet still, the bulk of the form deals with property claims.

Mr Shilon is splitting hairs. Since when does heritage exclude lost
property? Such losses could encompass the ancestral home, the khan (a Middle Eastern cross between a warehouse and inn), the family business, a synagogue endowed by one’s family and all  possessions and heirlooms.

The project “And you shall tell your son”
stems from a 2009 government decision to change Israel’s long-standing policy
on the narrative of Jewish immigrants from the Middle East. Until then, the
state had objected to labeling them as refugees who were expelled from their
countries and dispossessed of their property, for two reasons.

One was that, according to the Zionist
ethos of David Ben-Gurion’s era, Israel didn’t absorb refugees who came to it
against their will, but immigrants who arrived after 2,000 years of longing.

There is some truth to this:
absorption was made easier because these newcomers to Israel were encouraged to see themselves as
returning to the ancestral homeland. Israel did not seek to exploit its refugees for political purposes.

The second reason was fear of creating an
equation that acknowledged the fact that the War of Independence created two
kinds of refugees: Jews expelled from Arab lands, and Palestinians expelled
from Israel. Even their numbers are similar: Some 800,000 Jews arrived from
Arab lands ‏(until 1967‏), and some 700,000 Palestinians were counted as
refugees by the United Nations.

The figures are wrong. Some 300, 000 Jews
did not go to Israel at all. Were these refugees or immigrants – because
they found a home in France, Canada or Brazil? Just because they ceased to become refugees when they became citizens of their new countries does not mean that they were not refugees on arrival. It is true that Israel did no want to equate the two sets of refugees, in casethe Arab side did so.
But the Arab side never ceased to do so: Israel’s silence created a distortion.

The change in the government’s approach
toward this narrative of immigration stemmed from recognition of the fact that
from an international standpoint, Israel would have trouble evading pressure to
recognize its responsibility, at least to some degree, for the Palestinian
refugee problem. Because the Palestinians’ demand for a right of return is
taboo, it’s reasonable to assume that the state will be forced to contend, at
the least, with their claims for compensation.

Here the author makes a false assertion:
arguably, Israel is not responsible for the plight of Palestinian refugees. They are a by-product of a war instigated by their own side. The Jewish refugees, who neither wish to, nor can, return to Arab lands, do neutralise the Palestinian ‘right of return’ – an unreasonable and unprecedented political demand. Compensation is a separate issue.

Defining these Jews as refugees could thus
accomplish two goals: overshadowing the Palestinians’ narrative of the Nakba
‏(“catastrophe”‏) with a greater Jewish catastrophe, and offsetting their
financial claims against Israel. According to researchers’ calculations, Jews
in Arab countries owned property whose value exceeded that of Palestinians in
Israel.

Mr Shilon is out-of date: there is no talk of ‘offsetting Palestinian financial claims with Jewish claims’. The thinking nowadays is that both sides should be compensated out of an international fund, as proposed by Bill Clinton in 2000.

Nevertheless, this equation also raises
questions from the field of international law. For instance, Israel
unofficially cooperated with the Iraqi parliament’s decision to confiscate
Iraqi Jews’ assets in exchange for its decision to allow these Jews to move to
Israel. Does this mean that Israel waived their property claims?

Not true. Israel cooperated with a plan to airlift out Jews from Iraq in 1950, but Iraq’s law freezing Jewish property in March 1951 came like a bolt from the blue. The move created consternation and an angry reaction from the then foreign minister, Moshe Sharrett. “The Arabs have opened up a reckoning with Israel,” he said.

Either way, the irony is that a right-wing
government is the one that is undermining the Zionist narrative by treating
Jewish immigrants from Arab lands as refugees. Judging by the personal history
of my own family, which immigrated from Baghdad, the “refugee” definition is
debatable. Granted, most of them weren’t engaged in Zionist activity and
decided to immigrate because of the hostility that erupted against them after
Israel’s establishment. But the Jewish consciousness they had preserved for
hundreds of years is what caused the genuine excitement that accompanied their
immigration, despite the difficulties and the loss of their property.

There is no irony. The ‘refugee’ definition is not debatable at all. One can be a refugee and still fulfil 2,000 years of longing. The pull factor of Eretz Israel does not cancel out the push factors of persecution and hostility in the country of birth. The author admits that his own family were not active Zionists: it is likely they would never have left Iraq at all had they not been forced to.  The ‘right-wing’
government’s refugee campaign is correcting a distortion, it is not re-writing history.

If the government truly intends to try to
reach an agreement, and not just to pose a counter to the Nakba, the equation
between Palestinian and Jewish refugees has some value. It’s just a pity that
along the way the state is misleading its elderly citizens twice over. Once is
by enticing them to file a claim under the pretext of documenting their
heritage. The other is by encouraging them to believe that filling out this
form will help them recoup the value of their property, when the real purpose
is to obtain a bargaining chip in the negotiations.

Property is an integral part of one’s heritage (see above). Compensation is not inconceivable for these elderly claimants – from an international fund (see above).

In this matter, at least, all Jews are
brothers: The Mizrahim can ask Holocaust survivors about how much generosity
the Israeli authorities have displayed toward them.

Shilon is confusing the issue. Holocaust survivors may have had a raw deal, but at least the German government recognised its responsibilites and sent reparations. There is no sign of Arab governments doing the same. It is disheartening that Shilon expects nothing of them, and yet is so cynical towards the Israeli government.

An exchange of views with the Asylumist