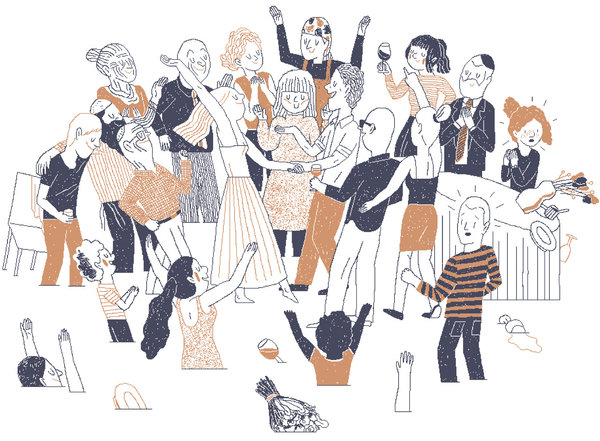 Ethan Bronner used to be the Jerusalem bureau chief for The New York Times. I found fascinating his impressions of how Middle Eastern Israel really had become as intermarriage between eastern and western Jews becomes the norm. But as the New York liberal he remains, he cannot understand why Israel can ignore the Palestinians. It would never occur to him to see anything remiss in the Palestinian refusal to talk to Israel, let alone extend a hand of friendship.

“Back in Tel Aviv for a recent visit a year after ending my tour as
Jerusalem bureau chief, I was struck by how antiquated that wisdom felt.
At a fascinating and raucous wedding I attended and from numerous
conversations with a range of Israelis, I came away with a very
different impression.

“Few even talk about the Palestinians or the Arab
world on their borders, despite the tumult and the renewed peace efforts
by Secretary of State John Kerry, who has been visiting the region in
recent days. Instead of focusing on what has long been seen as their
central challenge — how to share this land with another nation —
Israelis are largely ignoring it, insisting that the problem is both
insoluble for now and less significant than the world thinks. We cannot
fix it, many say, but we can manage it.

“The wedding took place near Ben-Gurion airport, where a set of event
halls has gone up in the past seven years, including elaborate
structures with a distinct Oriental décor of glistening chandeliers,
mirrored place mats and sky-high ceilings with shifting digital
displays. The groom’s grandparents emigrated from Yemen; the bride’s
came from Eastern Europe, an example of continuing and increasing
intermarriage between Sephardim and Ashkenazim.

“The music was almost entirely Middle Eastern in beat, some of it in
Arabic, some of it religious. The hundreds on the dance floor, many
staying until dawn singing along with arms gesticulating, came from
across a range of political, geographic and religious spectra — from
miniskirted to ultra-Orthodox modesty. Frumpy settlers in oversize
skullcaps mingled with Tel Aviv metrosexuals in severe eyewear. Some
women hugged you; others declined to shake your hand. Everyone was
celebrating. No one, especially the Orthodox rabbi who presided over the
ceremony, mentioned that the young couple had been living together for
more than three years. Some talked politics with me. No one mentioned
the Palestinians.

“Israel today offers a set of paradoxes: Jewish Israelis seem in some
ways happier and more united than in the past, as if choosing not to
solve their most difficult challenge has opened up a space for shalom
bayit — peace at home. Yes, all those internal tensions still exist, but
the shared belief that there is no solution to their biggest problem
has forged an odd kind of solidarity.

“Indeed, Israel has never been richer, safer, more culturally productive
or more dynamic. Terrorism is on the wane. Yet the occupation grinds on
next door with little attention to its consequences. Moreover, as the
power balance has shifted from the European elite, Israel has never felt
more Middle Eastern in its popular culture, music and public displays
of religion.”