Muslim leaders have travelled to Germany and
Poland to see and hear for themselves about the horrors of the Jewish
Holocaust, the BBC reports. While visits like this are vital in combating Holocaust denial in the Arab and Muslim world, they are more remarkable for what they conceal than reveal. They have the unfortunate side-effect of projecting the Holocaust as a purely European story.  I’ll wager that the question of sympathy with Nazism,even complicity,of key Arab figures, is not touched on, nor is the postwar ethnic cleansing of Jewish communities in the Arab world as a result of Nuremberg-style laws mentioned; nor the legacy of Nazi-inspired Islamo-fascism, still very much with us today.

The 11 imams, sheiks and religious teachers from nine
countries met a Holocaust survivor and Poles whose families risked
execution to save Jews from the Nazis, in the Polish capital’s Nozyk
Synagogue as part of the tour.(..)

“The main aim is to get Muslims who are leaders all over the
world, particularly in the Middle East, to acknowledge the reality of
what happened here and to be able to teach it to the people that they
lead,” said trip organiser Rabbi Jack Bemporad, who is executive
director of the US-based Center for Interreligious Understanding.

He was standing underneath the red brick watchtower over the
main entrance to Birkenau, the largest of more than 40 camps that made
up the Auschwitz complex. This was where the Nazis installed four gas
chambers and crematoria to speed up the murder and disposal of people,
who were mostly Jews, from across Europe.

Auschwitz-Birkenau, set up by the Germans in Nazi-occupied
Poland, is largely intact and is now a museum. Historians estimate 1.1
million people were killed there – one million of them were Jews but
there were also Poles, Roma, Soviet prisoners of war and others.

“I think that when someone wants to deny the Holocaust or
think that it is exaggerated, which many of them do and certainly many
of their followers do, when they come here and see it, their experience
is such that they can no longer think that,” Rabbi Bemporad said. 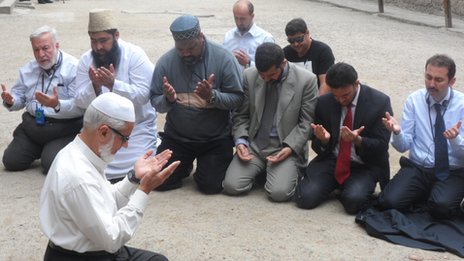 The visitors stopped to pray beside an execution wall.

Beside the ruins of one of the gas chambers – the Germans blew
them up as they retreated, in an effort to hide their crimes – the
Muslim leaders paused for a moment’s silence.

“You may read every book about the Holocaust but it’s nothing
like when you see this place where people were burned,” said Mohamed
Magid, president of the Islamic Society of North America.

“This is the building, the bricks. If they were to speak to
you and I, they would tell you how many cries and screams they have
heard.”

Mr Magid, who is originally from
Sudan, first visited Auschwitz-Birkenau during a trip organised for
American imams in 2010. He said the experience had led him to hold an
annual Seder, a Jewish ceremonial meal, at his mosque in Virginia where
he invites people to listen to the story of a Holocaust survivor who was
saved by a Muslim family.

“We go back more committed to human rights and more
understanding of conflicts and how to resolve them, but also to be
careful of a curriculum that teaches racism and hatred,” he said.

Earlier, the group had taken photos as they walked around an
exhibition in the red brick barrack blocks at Auschwitz, about 2 miles
(3kms) from Birkenau.

They made comments such as “Can you imagine?” and “It’s
beyond comprehension” as they saw a great pile of hair shorn from women
prisoners that was used to make rudimentary textiles. They shook their
heads as they saw faded children’s shoes and dolls in glass cases.

After they had seen just two of the 14 exhibition blocks,
some of the group asked for a break and they knelt in prayer beside the
camp’s execution wall.

Barakat Hasan, a Palestinian imam and director of the Center
for Studies and Islamic Media in Jerusalem, said he “didn’t know many
details about the Holocaust” before the trip. 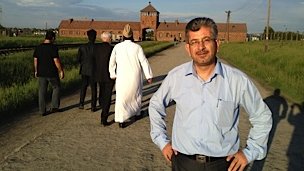 Barakat Hasan, a Palestinian imam, said he would share what he had learned on the visit

“I felt my heart bleeding when I was looking at all this. I was
fighting back tears,” he said through an interpreter. “As a Palestinian
living under occupation, I feel sympathy for the pain and injustice
that was inflicted on the Jews,” he added.

Mr Hasan said he did not believe there were people in the
Muslim world who denied the Holocaust happened, but he said there was
discussion in his community about whether the commonly quoted figure of
six million Jewish victims was correct.

“Maybe now after seeing what I’ve seen, maybe the numbers are
correct also,” he said, adding that he would write articles and mention
his trip on Facebook.

As he walked along the railway line and unloading ramp at
Birkenau – where the trains hauling cattle cars crammed with Jews
arrived – Ahmet Muharrem Atlig, a Turkish imam and secretary general of
the Journalists and Writers Foundation in Istanbul, said he wept when he
saw a photograph that showed children looking scared as they got off a
train.

“Unfortunately the Muslim communities and congregation don’t know much about the Holocaust,” he said.

“Yes, we’ve heard something. But we have to come and see what
happened here. It’s not just about Jews, or Christians, this is all
about human beings because the human race suffered here.”