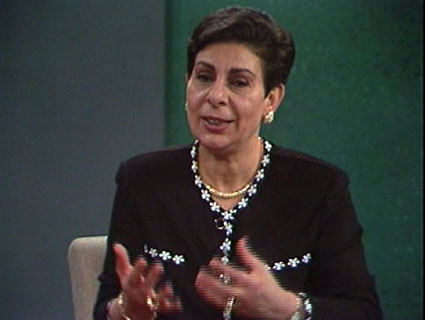 Hanan Ashrawi’s worried. Very worried. How else can you explain that she has written her second article in a week refuting Danny Ayalon’s campaign for Jewish refugee rights? The article, in the Huffington Post, reads like a rehash of Lara Friedman’s piece in the Daily Beast – rebutted here.(With thanks: Sylvia)

Here are two key paragraphs, with my comments underneath:

At the very core of Zionist ideology is the idea that Israel is the homeland of the Jewish people. If this is the case, and Jews living in Israel are citizens of their singular national homeland, then the state cannot consider them refugees — they cannot be returnees to Israel and refugees from another homeland at the same time. Demanding that the international community treat Jewish immigrants as refugees is therefore an act of “dezionization.” If, however, they are refugees and Israel is not their homeland, then their primary right is the right to return.

No matter which country refugees end up living in does not alter their refugee status when they left their country of origin. How does Ashrawi account for the 285,000 Jews who did not go to Israel, but found sanctuary in the West?

Responses to my Arabic-language article accuse me of denying that Jews suffered targeted persecution in many states. I do not. Jews and others who were forced out of the countries they call home, and who consider themselves refugees, should be permitted to return. We Palestinians are unfortunately well acquainted with exile, and we stand in solidarity with all people who struggle to return to the countries from which they were expelled.

Ashrawi contradicts herself by admitting that Jews WERE persecuted – the very definition of a refugee. Show me the Jews who are struggling to return to the countries they were expelled from. They are a figment of Ashrawi’s imagination. Meanwhile the Palestinian demand to return is itself an admission that they were not persecuted into leaving.

What we cannot tolerate is Israel denying the rights of those whom it has itself turned into refugees while demanding refugee recognition for some of its own citizens for the sake of compensation and undercutting the Palestinian right of return to homes and lands from which our people were forced out in 1948. In launching such a deceptive campaign, Israel is not fighting for the rights of its people; it is seeking to distort the Israeli-Palestinian struggle and deny rights to the Palestinians it ethnically cleansed 64 years ago.

“We cannot tolerate” the truth: Israel’s attempt to correct a historic distortion. The game’s up, Hanan. The more you squeal, the less convincing you sound.

Here are some articulate comments from the Ashrawi thread:

The right to return is not the issue. I did not want to be allowed to return to Communist-ruled Czechoslovakia, because I could have been arrested there. Similarly if Arab Jews return to Arab countries, they could be persecuted there, so no wonder they generally don’t want to return. I was a refugee, but later US gave me citizenship, so now I am an American of Czech ancestry. But the problem is that most Arab countries have refused to offer citizenship to Palestinian refugees or even their children born in those countries. Instead they continue to consider them refugees and house most in refugee camps. The idea of returning these Palestinians and even allowing their foreign-born kids to settle in pre-1967 borders of Israel is totally unrealistic, Israel would not allow it, since they would end up being ruled by an Arab majority. Israelis want to be ruled by Jews after so many centuries of being ruled and persecuted by gentiles.

*If this is the case, and Jews living in Israel are citizens of their singular national homeland, then the state can not consider them refugees – they can not be returnees and refugees from another homeland at the same time*.

I beg to differ. A person can have more than one nationality, for example. In my family there have been people even with THREE nationalities, a mother with one citizenship, a father with a second citizenship, and the child was born in a third country. It obtained citizenship of all three countries. If that child would have been expelled for some reason, religion, or otherwise, from the country of its birth, and would be a refugee from that country, and flee to the country of either of its parents’ origin, this person would be a refugee, as well as a citizen of that country. It can een get more complicated than that. I have had several different citizenships, one twice, and have been stateless. I have become a citizen in another country. If I had to flee and become a refugee, and remigrated, and became a citizen, of one of the countries I had formerly resided and had citizenship status, I would still be a refugee. Palestinian Refugees are put in a special category because of UNWRA regulations. That puts them in a special handicap status, without self determination, choice and opportunity.

So Jews kicked out of Arab countries can’t be refugees because they ended up in their national homeland of Israel, but Palestinians who are living in the Palestinian territories that they want to establish as a Palestinian state can be refugees? How is that? Sorry Ms. Ashrawi either both are considered refugees or neither are.