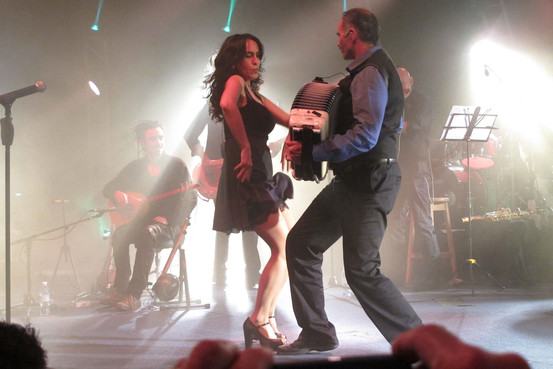 They call her Rita Khanum (Miss Rita) and avidly buy her bootleg CDs in Iran, but the hardline regime has not taken too kindly to the Israeli singer’s declared wish to sing a duet with President Ahmadinejad. Surely another Zionist plot? Profile of Persian-born Rita Jahanforuz in the Wall St Journal.(With thanks: Michelle)

Music-loving Iranians craving nostalgic Persian songs of a bygone era, or the upbeat dance music that is banned in their Islamic state, have new darling: Rita, the Israeli singing sensation.

Rita Jahanforuz, 50 years old, is Israel’s most famous female singer—and suddenly she’s big in Iran. Iranian-born and fluent in Persian, Rita, as she is universally known, moved to Israel as a child and has lived there ever since. Her latest album, “All My Joys,” revives old-time Persian hits, giving them an upbeat Mediterranean flavor that caters to the Israeli ear. 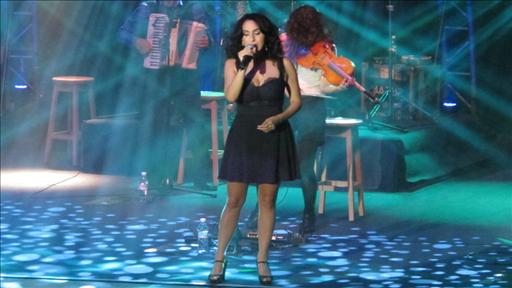 Israeli’s singing sensation, Rita, has won an underground Iranian fan base after releasing an album in Persian. In an exclusive interview, WSJ’s Joshua Mitnick talks with the star about how she’s become a goodwill ambassador for two countries that are sworn enemies.

The album went gold in Israel in just three weeks, despite being sung entirely in Persian. It also propelled Rita onto the music scene in Iran, where she was all but unknown outside of Iran’s small Jewish population.

Now, from nightclubs in Tel Aviv to secret underground parties in Tehran, Israelis and Iranians alike go wild when the DJ plays her hit “Beegharar,” or “Restless.”

Rita’s fans within Iran, where the government heavily filters the Internet, use tricky software to furtively download her songs online. Bootleg CD sellers in the back alley of Tehran’s old bazaar wrap her albums in unmarked packages and hush any inquiries when asked if they sell her music.

The governments of Iran and Israel are each other’s sworn enemies, and within Iran it is considered a taboo to publicly endorse anything that has to do with Israel. Iran’s president, Mahmoud Ahmadinejad, has said Israel should be wiped off the map. Israel has said it would consider pre-emptively bombing Iran to prevent it from building a nuclear weapon.

Rita, however, with her striking beauty and bubbly demeanor, has emerged as an unexpected bond between ordinary Iranians and Israelis—part cultural ambassador, part antiwar spokeswoman. A picture of Rita with the banner, “Iranians we will never bomb your country,” is posted on her Facebook page.

“These days, people only know the language of war and violence and hatred,” said Rita, referring to Israelis’ view of the Persian language, during a recent interview in Tel Aviv. After she started receiving emails from Iranian fans, she realized music can “puncture the wall” of tension.

Rita’s family immigrated to Israel in 1970. She grew up in a suburb near Tel Aviv listening to her mother sing melodies from their homeland as she cooked in the kitchen.

Her singing career kicked off when Rita joined a band in the Israeli army in the 1980s. She rose to stardom quickly, singing solo and mostly in Hebrew or English, packing concert halls and performing for Israeli officials and foreign delegates.

A year ago, she decided to revisit what she tells audiences is the “soundtrack of my childhood” by adapting Persian classics that most Iranians know by heart. Her 2011 single “Shaneh” is based on a traditional song that Iranian grandmothers are known to whisper to their grandchildren as they comb their hair. An homage to a lover, it includes lines such as, “Oh, love, don’t comb your hair because my heart rests in its waves.” Rita reworked the song, staying true to the lyrics but giving it a more modern sound, somewhere between pop and Jewish gypsy music.

Iranian fans responded overwhelmingly, bombarding her with emails and messages online. “Rita, I want one of these concerts in Iran. You have an amazing voice and you are another pride for Iran,” wrote an Iranian fan on one of her videos on YouTube.

In September, when Rita visited Radio Ran, a Persian-language Internet radio station based in a Tel Aviv suburb, the studio was flooded with calls from Iranians around the world.

In an Israeli television interview, speaking of her Iranian fans, she joked that if she ever traveled to Iran, she would like to sing a duet with Mr. Ahmadinejad, “Maybe I can soften him with my feminine charm,” she said.

Iran’s government has taken notice. Fars News Agency, affiliated with the Revolutionary Guards Corps, wrote last July that Rita is Israel’s “latest plot in a soft war” to gain access to the hearts and minds of Iranians.

Iranian hard-line websites and blogs expressed particular displeasure at Rita for sending a message to Iranians this past March for the Norouz New Year, via a video posted on the Persian website of Israel’s Foreign Ministry. Norouz messages are considered highly political and usually a tactic used by politicians like President Barack Obama and Iran’s opposition leaders.

“I hope that we all live alongside each other by dancing and singing because this is what will last,” Rita said in her Norouz message.