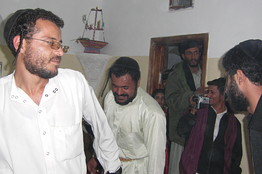 Lyn Julius reflects on what’s been a bad week for the Jews of Yemen, with the murder of Aharon Zindani. Will it be enough to make the remaining Jews leave? Read her blog in the Times of Israel:

Earlier this week, Aharon Zindani lost his life. He was stabbed 12 times in the neck and stomach by a Yemeni Muslim shouting “you have put a spell on me” at Saawan market near the US embassy in northeast Sana’a, while Zindani was shopping with his children. He died later in hospital.

Zindani had emigrated from Yemen to Israel in the 1990s. For some reason – some say he had trouble adjusting to his new country – he moved back to Yemen.

But Zindani’s murder was not a clear-cut case of an innocent snuffed out by Islamic radicalism for being a Jew. Only last week, Chief Rabbi Yahya Yousef Mussa condemned Zindani for swindling the community in Sana’a out of desperately-needed funds. He and another Jew, the rabbi alleged, had falsified papers allowing them to access benefits reserved for Jews in Yemen. They were planning to return to Israel with their ill-gotten gains.

The sense that Zindani was a rogue embroiled in shady deals probably explains why the few dozen Jews living in the capital still apparently “do not feel they are in danger.”

Even if there is no love lost between Zindani and the 70-odd Jews in the city, their protestations that they feel safe in a country where life is cheap, sound increasingly hollow. Zindani’s murder would have brought back memories of another murder in December 2008, the reason for the Jews’ relocation to Sana’a in the first place.

A 30-year-old father of nine, Moshe Al-Nahari was shot by a man shouting, “convert or die!” Al-Nahari too had spent time in Israel and was planning to return there. But his father apparently dissuaded him at the last minute.

Following Al-Nahari’s murder the Jews were being increasingly harassed in their home town of Raida, where a low-level civil war was raging. President Saleh offered them sanctuary in the capital in two cramped blocks. But they are virtual prisoners in their compound, cannot support themselves and have been living on meager government hand-outs.

Although some of Al-Nahari’s children left for Israel, the rest of his family swore they would not leave until they had secured the death penalty for his murderer. At first, the courts ruled that the murderer was mentally unstable and only had to pay blood money. On appeal the courts sentenced the killer to death.

That was not the end of the story. Al-Nahari’s son was kidnapped by the murderer’s tribe in order to thwart the death sentence. A year ago, the killer bribed his prison guards and escaped from jail.

Following the murder of Aharon Zindani, the question on everyone’s lips is – why do these Jews stay there?

The vast majority of Yemen’s Jews were airlifted out to Israel in 1949 –50. In the mid-1990s, a wave of about 1,200 were resettled in Israel. But the remaining 300 Jews fell under the influence of the Satmar ultra-orthodox anti-Zionist sect. Jews could come and go relatively freely, but the Satmar warned against moving to decadent and secular Israel. They began paying Jews to stay in Yemen. As the security situation deteriorated still further, some 60 Jews have been admitted to the US and resettled in Monsey, the Satmar enclave in New York.

Now and again the Jews in Sana’a make protestations of loyalty to the regime and condemn the steady trickle of Jews deserting Yemen. The Sana’a Jews are behaving like archetypal ‘dhimmis’, owing their lives to the protection of the ruler. They would not betray the president who offered them hospitality by leaving. With the outbreak of the ‘Arab Spring’, however, President Abdullah Saleh has been toppled after 33 years in power. The leadership of the tiny community now think that the answer is for the Jews to have a say in the politics of the country. In a recent interview with CNN Arabic, Yemen Chief Rabbi Yahia Yousef Moussa called on the country’s President Hadi to allow the Jewish community and other minority groups to have seats in the country’s parliament. Such pronouncements smack of desperation. How much influence will a few dozen Jews have in a country of 23 million Muslims?