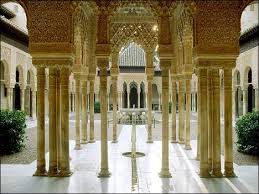 The court of the Lions at the Alhambra palace in Granada

The idealised golden age of Jewish-Muslim coexistence in medieval Spain is dealt another blow – from an unlikely quarter. Writing in the leading daily Svenska Dagbladet, Inger Enkvist, a Swedish university professor of Spanish, says that new research is ending the politicisation of Spanish historiography (with thanks: Torbjorn):

Spanish historiography has often been characterized by myths and propaganda. Now new research offers a different picture from the one previously presented, including of the Franco regime and the years leading up to the Civil War.

In short, history is used intensively as a political argument in the Spanish daily debate mainly by regional nationalists in “office” in their region and in the Zapatero regime. Large financial contributions have been made to such historical representations that support ideological interests. Politicization is so intense that the historians who have a scientific orientation often avoid studying key issues in order to not get into trouble if they come up with the “wrong” results.

Historians show a lack of honesty in relation to their subject by disseminating rough, distorted versions and a lack of moral courage vis-a-vis their community by not daring to point out how history is misused. Entire areas of Spanish history have thus become taboo. In the very recent past, other research both from within and outside Spain has been able to filter through.
Some breakthroughs have been made, for example in the scientific study of the Muslim period after 711 and the Second Republic 1931-1936. The breakthrough in the case of the Muslim period is associated with new forms of cooperation. Specialists in Spanish history had been working with experts in the Middle East and North Africa, with Arabists and Islamologists, and the result is that the idyllic picture of conditions in Muslim Spain that is usually conveyed cannot be substantiated except in isolated cases. This (myth) can be traced to the Jewish circles in Britain* in the mid-1800s who, by claiming that Jews were treated better in other cultures wanted to pressure the British government to relax restrictions. (…)
Stanley G. Payne, an American historian, (..) is currently one the most respected experts in the field. (..) He researches the idea of ​​multicultural coexistence in Spain during Muslim rule, but finds no evidence of this. He also stresses that Spaniards later had major problems with Muslim pirates in the Mediterranean. It is not very well known that probably as many as 150,000 Spaniards (mainly during the 16th and 17th centuries) were sent as slaves to North Africa or kidnapped for ransom. The danger from pirates did not disappear until the early 1800s after a British effort to curb them.

Inger Enkvist is a professor of Spanish at Lund University.
Read article in full (Swedish)

*This theory is not new. One of the leading writers on Islamic history, Bernard Lewis, believes the golden age in Spain is a myth – Jews were persecuted by both Muslims and Christians: ‘Belief in it was a result more than a cause of Jewish sympathy for Islam. The myth was invented by Jews in nineteenth-century Europe as a reproach to Christians ­ and taken up by Muslims in our own time as a reproach to Jews.’ – ed