Next time you hear how Jews and Muslims coexisted harmoniously through the centuries, think of Solica, the 19th century Jewish martyr who chose to die rather than convert to Islam. For Jews were always under psychological pressure to do so (as are Coptic girls today). In Fez, a Moroccan bastion of Muslim piety, a quarter of the Muslims are estimated to have converted from Judaism. Daphne Anson has found an account of Sol’s martyrdom written 20 years later: 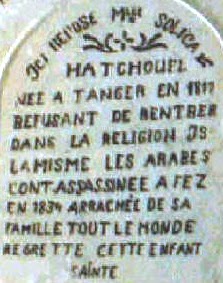 On her tomb in Fez, Morocco, beneath an elaborate Hebrew inscription, there is an epitaph in French for the martyred Mademoiselle Hatchouel (1817-34). Her forename appears as Solica, although it appears in some sources in briefer form as Sol (“sunshine”).

Frederick David Mocatta (1825-1905), scion of a prominent Sephardi family of bullion brokers whose members were at the heart of Jewish communal leadership in England, was told her story in detail in 1858 when he was visiting Morocco.

In the course of a letter written that July, which was published over two issues of the Jewish Chronicle (7 and 13 August), he rather inexplicably gives her forename as Luna (“moon”).

“In the year 1834 there resided in Tangier a Jewish family named Hatchuel [sic], the eldest daughter of which was a lovely girl of 16. Her mother was a woman of violent temper, and poor Luna (for such was our heroine’s name) led a very unhappy life. One day when Luna had received more harsh words from her mother than she could bear, she sought refuge and advice from an old Moorish nurse who lived near, and the woman begged her to abjure her faith, embrace Mohammedanism, and thus separate herself from her shrewish mother for ever.

Long and earnestly poor Luna refused to listen to her adviser, till at last the Moorish woman, incensed at her obstinate firmness, closed the doors on her victim, and rushed into the presence of the cadi (judge) stating that a Hebrew maiden had voluntarily embraced Islamism, but was now endeavouring to relapse into Judaism, and abjure her new faith, and that no fear of punishment could ever induce her to do so.

Still the Moorish woman kept firm to her declaration, and as the oath of a Moslem is thought in that country of far more value than that of a Jew, her testimony prevailed, and poor Luna was sentenced either to embrace the Mussulman faith, or to be taken before the Imam (high priest) of Fez, for trial before the religious court of the capital. Thus, by a painful journey of many days the unfortunate maiden was carried to Fez, and there brought before the Imam, who, after a solemn trial, condemned her to death, unless within a stated time she would abjure the religion of her fathers.

During the trial it chanced that one of the sons of the Sultan [of Morocco] caught sight of the fair Jewess, and struck by her great beauty, artless youth, and her unhappy position, he resolved to save her at all costs, to acquire the Hebrew maiden for his harem. Thus, therefore, he represented the case in glowing terms to his father and begged him to grant a pardon; but the Emperor replied that absolute Sultan as he was, he still was powerless to revoke the edicts of the religious judge, and that unless the maiden would recant her faith the law must take its course.

In despair, this prince entreated Luna to embrace the Mohammedan faith, and sought by brilliant promises on the one side, and by the picture of death on the other, to cause her to change her resolution, but to no avail. Luna declared that she would rather yield up her life to her Creator in all its maiden freshness, than live on in luxury, in the shame of apostasy. And thus, the fatal day drew nigh, and the hour of her doom approached, but the Hebrew maiden remained unchanged in her resolve, and only sought the more to prepare her for her approaching end.”
Read post in full