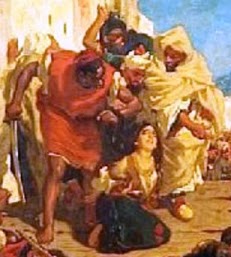 Sol the martyr, Jewess executed for refusing to convert to Islam in 19th century Morocco

Although they did not always rigidly enforce dhimmi rules, Muslims need to confront traditional noxious anti-Jewish sentiment. But is this antisemitism an import from Europe, or a continuation from Muslim orthodoxy and theology? Fascinating piece reprinted in Harry’s Place from Israel National News, by Aymenn Jawad al-Tamimi.

Many of the conditions of the Pact of Umar are upheld as the ideal model for the treatment of non-Muslims among orthodox, classical Muslim theologians (e.g. the requirement to wear clothing to distinguish the unbelievers from Muslims).

In practice, at least up to the thirteenth century, certain regulations were not strictly enforced, especially when it came to Jews, who were generally able to integrate in Muslim lands better than Christians did. This development was partly due to similarities in some customs promoted by Shari’a and Halakhah: a notable example being dietary prohibitions on pork.

Indeed, in Muslim Spain, Jews were not obliged to dress differently from Muslims, and often wore fine silk and linen apparel.

Meanwhile, as evidence from the Cairo Geniza makes clear, during the Fatimid dynasty’s rule in Egypt (969-1171 CE), Jews were frequently able to get involved professionally in the Fatimid government. For a good overview of the treatment of Jews in practice under Islamic rulers during the High Middle Ages, see Mark Cohen’s work “Under Crescent and Cross: The Jews in the Middle Ages.”

Nonetheless, it is unfortunate that Mark Cohen ends his study in the thirteenth century because, for a fuller analysis, he could have gone on to explain the general subsequent decline of the Jewish position in Muslim lands, as the Islamic world became increasingly insular, more inclined to orthodox implementation of Shari’a, and less open to foreign ideas and influences.

In any case, the evidence indicates that Esther Webman was clearly wrong when she wrote in 1994 that “anti-Semitism did not exist in the traditional Islamic world… [it] is, in fact, a relatively new phenomenon…gaining ground particularly since the eruption of the Arab-Israeli conflict in the mid-twentieth century.”

Yes, in practice, Muslim rulers were not as harsh as orthodoxy dictates they should have been on Jews during the High Middle Ages, yet it is noteworthy how such leniency was much to the chagrin of both the clerics and often the Muslim populations at large.

The writings by Jews from that period in the Cairo Geniza use a specific term- sin’uth– to refer to hostility from local Muslims towards Jews. The resentment over the appointment of Jews to positions of authority very occasionally spilled over into outright violence, culminating in the massacre of the Jewish community in Granada in 1066 by a Muslim mob. The hatred was directed at a certain Joseph ibn Naghrela in particular, and at Jews in general.

The sentiment is well reflected in a contemporary poem by Abu Ishaq, who helped to incite the pogrom: “Do not consider it a breach of faith to kill them, the breach of faith would be to let them carry on/ They have violated our covenant with them, so how can you be held guilty against the violators?”

Thus, we have the central idea that forms a distinct brand of Islamic anti-Semitism: namely the motif that Jews are most hostile to Islam and Allah’s revelations among humanity, and therefore prone to treachery in dealings with others, arrogant self-righteousness, slaying Allah’s messengers and prophets, and other forms of evil conduct.

For example, the Qur’an itself affirms, “You will surely find that the people most hostile to the believers are the Jews and pagans” (5:82). This verse could be taken as just a reference to Muhammad’s historical conflicts with the Jewish and pagan tribes of Arabia, but orthodoxy did not interpret it that way, seeing the Qur’an as literally valid in its axioms for all times and places.

This theme of unique Jewish hostility in Islam appears to have been a continual thread throughout Muslim history. Writing in the ninth century, the polymath al-Jahiz wrote that the local Muslim populations generally find the Jewish people more repulsive than the Christians because the former, supposedly delighting in their sense of superiority, choose not to intermarry with those outside their religion. He also identified 5:82 quoted above as a reason why the Jews were regarded by the Muslims of his time as more treacherous and guilty of unbelief.

A.B. Clot, a French surgeon who resided in Egypt in the 19th century, reported that the local Egyptians thought that “the Jews hate Islam more than any other nation…Speaking of a fierce enemy, the [Egyptian] Muslims say: ‘He hates me the way the Jews hates us.’”

And so today we hear sermons from clerics such as Sheikh Ibrahim Mudeiris, who has often appeared on the Palestinian Authority’s state TV channel and in a 2005 sermon cited 5:82 as proof in his eyes of the Jews’ evil nature and their conspiring against Gentile nations.

Once we take into account the distinct brand of Islamic anti-Semitism (just as there is a specific strand of Christian anti-Semitism, albeit not as prevalent today as anti-Semitism takes on new forms), it can be seen why so many in the Muslim world have been receptive to the blood libel and works like Mein Kampf and the Protocols of the Elders of Zion.

Yet Islamic apologists- Muslim and non-Muslim- remain in denial about this noxious anti-Jewish sentiment, both in Muslim history and in the present day (including sermons like those of Mudeiris and the Hamas Charter).

Only when this anti-Semitism and its roots are confronted openly and honestly can there be a reasonable chance of eradicating this prejudice from the Muslim world at large.

My comment: I’m not sure that a key element of Islamic antisemitism is the view of the Jew as deceitful and treacherous. On the contrary, there is evidence that Muslims considered Jews honest. Jews often acted as middle men between warring tribes and clans who did not trust each other.

Central to Islamic antisemitism is not so much hatred, as contempt. Jews were greeted by Moroccan Muslims with an expression to the effect: ‘may you see the light’ (convert to Islam). There was continued pressure to convert, or suffer humiliation. Of course their condition varied from Caliph to Caliph and Qadi to Qadi – and it is interesting the Jews fared worst where the Christian minority had died out – in Yemen and Morocco. The value of the Jews always lay in their utility to the ruler, so in that sense they were all ’slave chattels’, albeit some more prosperous and influential than others.

To answer Aymenn’s question – is antisemitism in the Islamic world a modern import from Europe, or a continuation from orthodox Islamic theology and Muslim history? My view is that it’s a combination of the two.

Matthias Kuntzel is persuasive in his theory that under the influence of Nazism in the 1930s the Islamic and Arab world took on the European concept of the Jew as an all-powerful evil force, and married it to its pre-existing religious and social prejudices to make a toxic brew that is at the basis of Islamism today.