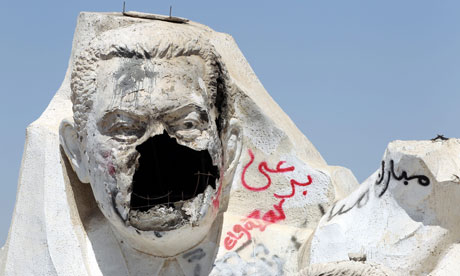 Ian Black, The Guardian’s Middle East editor, has been busy lately – answering questions from the great unwashed about the ‘Arab Spring’. Here’s an interesting one from Zamalek, followed by Black’s reply:

What future do you see for minorities post-the Arab Spring?

It is too late to save the Jews who have virtually been ‘ethnically cleansed’ from Arab lands, but are things going to get better or worse for the Christians, eg Copts?

What about the Berbers and Kurds?

Interesting question: it’s hard to imagine a Jewish renaissance in the Arab world without a settlement of the Palestinian question. Christians in Egypt are certainly worried about the rise of Islamists, but the Muslim Brotherhood has been going out of its way to be reassuring on this point. Salafi groups are a source of greater concern and have featured in several bad cases of sectarian violence – notably in the Cairo neighbourhood of Imbaba in May. Many have warned of the risks of manipulation by shadowy pro-Mubarak forces.

The dangers of sectarianism are a very significant part of what is happening in Syria, where there is a large Christian community and the regime is dominated by the Assad family’s Alawite sect. Syrian Christians seem to less involved in protests than others. Syrian Kurds have been taking an active part in anti-regime protests.

Pressure for change in Morocco has brought official recognition of Amazigh, spoken by Berbers, as an official language.

Copts: Black makes out that the Muslim Brotherhood are more moderate/ more reasonable than Salafi Islamists, although I don’t know how he manages to distinguish between them.

Kurds: Black says nothing about Assad’s futile appeasing gestures towards the Kurds and his latest crackdown on them. Trouble is, the opposition is just as nationalist as the regime. You may find more useful information in this analysis.

Jews: Black has failed to understand why the Arab world is judenrein. Why should loyal Jewish citizens of their countries have had to pay a heavy price for Arab defeat and humiliation in Palestine? I’m sure he would never tie the situation of Israeli Arabs to the resolution of the Arab-Israeli conflict – so why does he do it to the Jews from Arab lands?

In an in-depth response, Just Journalism has taken Ian Black to task for trivialising and failing to see the connection between the ethnic cleansing of Jews and other minorities:

The issue of the Jewish communities that used to exist in the Middle East is one that is rarely discussed in the media. Black began his answer as follows:

‘Interesting question: it’s hard to imagine a Jewish renaissance in the Arab world without a settlement of the Palestinian question. Christians in Egypt are certainly worried about the rise of Islamists, but the Muslim Brotherhood has been going out of its way to be reassuring on this point. Salafi groups are a source of greater concern and have featured in several bad cases of sectarian violence – notably in the Cairo neighbourhood of Imbaba in May. Many have warned of the risks of manipulation by shadowy pro-Mubarak forces.’

The response of The Guardian’s Middle East editor raises a number of issues. To begin with, his reference to the apparent low probability of a ‘Jewish renaissance’ somewhat trivialises the recent history of the Jewish communities, suggesting that they are merely in a period of relative cultural decline. The reality, however, is that over the course of the last century thousands of Jewish citizens have abandoned their homes due to a combination of systematic persecution and the threat of mob violence. A typical case of this was the Farhud in 1941, an episode of aggression directed against the ancient Jewish community of Baghdad that was recently recounted by the BBC World Service. The Jewish presence in Iraq is now virtually non-existent, as is the case in most Arab-majority states.

Similarly, the suggestion that this situation won’t be resolved without a ‘settlement of the Palestinian question’ underplays the sheer level of hostility towards Jews in these countries, which goes far beyond political sympathy for the Palestinians. For example, throughout the Arab Spring both regimes and protesters in several countries denounced their opponents by smearing them as ‘Zionists’. The Times recently highlighted how even in Egypt, which has been at peace with Israel for several decades, postcards of Hitler are popular ‘because he killed Jews’.

Black also fails to connect the disappearance of Jewish communities from the Middle East with the fear that Christianity might also cease to exist in the Arab world. While he discusses the Copts in Egypt (and then Christians in Syria in the second part of his reply), he does not refer to the wider context of Christians leaving the whole Middle East en masse. In addition, his suggestion that Copts fear Salafists but not the Muslim Brotherhood ignores the fact that there is considerable evidence that the two groups are closely aligned.

In responding to a query about the possible ramifications of the Arab Spring for minorities, The Guardian’s Middle East editor elides the single biggest issue – that both Arab nationalism and radical Islamism have resulted in the persecution of vulnerable groups. Just Journalism has previously covered how The Guardian encouraged protesters to seek a ‘pan-Arab identity.’

Cif Watch: Ian Black and the expulsion of Jews from Arab lands