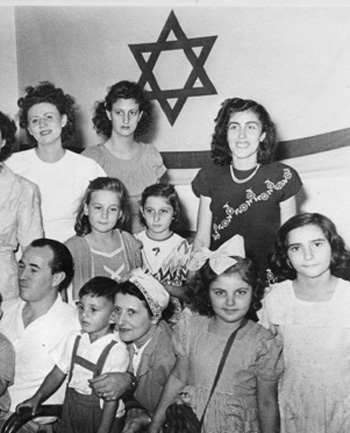 Sephardim from Iraq and Palestine once composed a segment of Indonesia’s Jewish community. Almost no Jews are left now in what is often referred to as the world’s largest Muslim democracy – but the descendants of converts to Christianity are returning to Judaism, Giora Eliraz writes in Inside Indonesia:

The forced departure of Dutch Jews contributed to the rapid decrease in the size of Indonesia’s Jewish community from 1957. According to a report by the World Jewish Congress published just a few days after the issuing of the order of expulsion, there were approximately 450 Jews in Indonesia in November 1957. Just a decade earlier there had been over four times that number. The report predicted that the rapid deterioration of Dutch-Indonesian relations was a real threat to the viability of the tiny community. Six years later only 50 remained.

But not all the Jews who left the archipelago were Dutch. Others, too, fled in the face of the increasing tension between Indonesia and the Netherlands and its ramifications in Indonesia, including the nationalisation policy, the threat of armed conflict over West Irian, and the growing tide of nationalist sentiment and xenophobia. Among those who left was the young Eli Dwek, the oldest of three sons of a Sephardic Jewish family living in Surabaya.

Eli’s story: The Dweks had arrived in the 1920s. Eli’s father, Gabriel Dwek, left Jerusalem for Surabaya in the mid-1920s with his older sister Rachel and her new husband, Moshe Bar, an Iraqi Jew who had an optical shop in Surabaya. The shop manufactured lenses, provided reading glasses, and imported and sold a variety of optical equipment.

Although a child at the time his family left Indonesia in late 1958, Eli believes that the seeds of his family’s decision to emigrate from Indonesia had been sown as early as late 1956 on the backdrop of reactions in Indonesia to the developments in the Middle East. In late 1956, Israel had launched a military operation against Egypt in the Sinai Peninsula. Around the same time, Britain and France launched an offensive in response to Egypt’s decision to nationalise the Suez Canal. Nasser’s Egypt was Indonesia’s close ally in the struggle against colonialism and imperialism, and the Anglo-French offensive stirred up anti-Western sentiment in Indonesia.

But the primary reason for the Dwek family’s decision to leave was the collapse of much of the infrastructure on which Jews depended with the departure of the Dutch. Schools were left without teachers, businesses without networks, and streets without law enforcement. There was also a growing concern among the Jews that they would be the next target for expulsion. As a result, although non-Dutch Jews had not been ordered to leave, many felt that it would be foolish to stay. According to Eli, this insecurity ‘started a domino effect. Once some Jews started leaving, others followed suit.’

A debate ensued in the Jewish community about where to go. Whereas Jews of Dutch origin went back to the Netherlands, for the Iraqi Jews, going back to Iraq was out of the question. Some had British citizenship because of their stay in India, and chose Australia as their new home. Others left for the United States. But for the Dweks the choice was clear. Their family and history were firmly rooted in Israel.

As a young child, leaving Indonesia was a great adventure for Eli. An army of grandmothers, uncles and numerous cousins awaited their arrival, and finally he would be in a land where he would not be a foreigner. For his parents the move was tinged with anxieties about settling in a new country that was undergoing a period of economic austerity, about their financial future, and about how the children would cope in a new home and culture.

Seeds of renewal: The forced departure of Dutch Jews in 1957 and the voluntary migration that followed constituted a watershed in the history of the Jews in Indonesia. Already small Jewish communities were threatened with extinction, their social networks and ritual life decimated. By the end of the twentieth century, only some 20 members of Indonesia’s two largest Jewish communities remained. In the absence of Jewish immigration to Indonesia, it appeared that Indonesian Judaism was doomed.

But fate is a funny thing. In recent years, two synagogues have opened in Manado and Tondano, two cities in the Minahasa region of North Sulawesi. These synagogues were founded by descendants of families of Dutch Jewish ancestry in this region. For Jews in the Minahasa region, conversion to Christianity was common after Indonesia gained its independence, as Christianity is the dominant religion in that area. Now their descendants are rediscovering their Jewish roots. Perhaps the curtain is rising once again – at least slightly – to reveal a new scene in the history of the Jews in Indonesia.