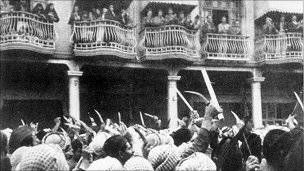 In the first half of the 20th century colonial powers seemed to have made a habit of deliberately not intervening to quell anti-Jewish pogroms in the Arab world. The Farhud in 1941 was not the only example: Fez in 1912, Constantine in 1934 and Tripoli in 1945 were others. This guest post by Paul Leslie on Harry’s Place concludes by quoting from original sources – corroboration indeed of the British ambassador Cornwallis’s ‘passive complicity’ with the Farhud. (With thanks: Lily)

The behaviour of locally-based British decision-makers at the time of the Farhud was not the only example of passive complicity by quasi-colonial or quasi-imperial authorities acting in Britain’s name, motivated by various realpolitical considerations.

There was also the 1945 massacre in Tripoli, which caused over 100 deaths and many more injured, when the British Military Administration deliberately waited two days from the initial outbreak on November 5 before intervening decisively (as documented in detail for example by the Quai d’Orsay officials and diplomatic representatives whose correspondence is contained within the file series Afrique-Levant, 1945- ). There was also the pogrom which erupted in Aden at the beginning of December 1947.

Britain was not the only European power guilty in certain situations of abandoning increasingly vulnerable and precarious minority communities to murderous mobs composed of members of the “colonized” majority.

Whereas such cases of the abandonment of minority communities usually coincided with times of crisis for (quasi-) imperial or colonial domination (another example from Iraq is that the government condoned if not promoted the massacre of Assyrians in Simele in August 1933), the April 1912 Fez massacre occurred at the very beginning of the French protectorate in Morocco (ratified by the Treaty of Fez of March 30 1912). The non-intervention of French troops stationed just outside the mellah had been preceded by raids in this Jewish quarter which ended with the extensive confiscation of arms both allegedly or actually illicit and weapons legitimately held for self-protection.