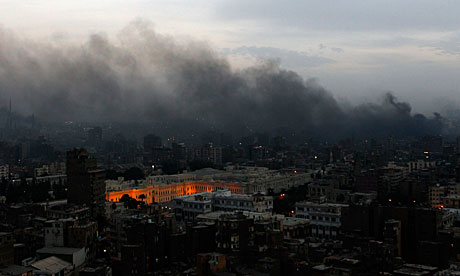 This post is dedicated to Point of No Return reader Andrew. At this very moment Andrew may be out there on the street demonstrating against Egypt’s tyrannical regime. We wish you well, Andrew, and all the brave souls who want Egypt to become a better place for all its people.

The following article for the Hudson Institute by Frank Salameh clearly expresses what is at stake for the Middle East’s vanishing and oppressed minorities unless democracy and the respect of civil and human rights are allowed to take root in the ‘Arab’ world.

The Copts — and other Near Eastern Christians facing extinction — in their ancestral homelands no less—should be spared the condescending wringing of hands and other worthless histrionics of collective sorrow. Something else, of an entirely different nature, needs to take place: politicians, academics, prelates, lay leaderships, Middle East experts, and decent Muslims all over the world could resolve to take a firm and decisive stand against Muslim supremacists. Nothing short of summoning brutally honest Arab and Muslim introspection — by Arabs and Muslims—should be deemed acceptable any longer.

The culture and theology that produce these sorts of genocidal impulses—of which the Copts are only the most recent victims—should be put on trial; not the “terrorists,” and not “al-Qaeda.”

The ongoing destruction of Eastern Christians is not a modern phenomenon, nor is it a reaction to Western colonialism, American meddling, the existence of Israel, the war in Iraq, or economic hardships in the Middle East—the standard pretexts flaunted by a biased Middle East scholarship and media.

The deliberate, methodical erasure of the histories, languages, cultures, and memories of indigenous non-Muslim Middle Easterners is a phenomenon fourteen centuries in the making. An honest recognition of this horrid legacy is imperative to a sound understanding of the Middle East.

Yet, the LA-Timesgave the Copts’ plight brief mention in this past Saturday’s edition, concluding with the mind-numbing claim that the shrinking numbers of Middle Eastern Christians were the outcome of economic hardship. This is arguably the saddest chapter in the Near Eastern Christians’ exodus saga of the past fourteen centuries; the distortion and dismissal of their plight, and the simplistic reduction of its causes to mere “economic” impulses.

This is the profoundly flawed “right way of thinking” mindset about the Middle East today validated by an LA-Times claiming that:

authorities worry that Christian communities in relatively safe countries, such as Lebanon, Syria, Jordan and Iran, also are shrinking, though driven more by a search for economic opportunities than by fear of violence. [… Middle Eastern Christians] tend to be better educated and more Western-oriented than their Muslim compatriots and often utilize family or religious ties abroad to emigrate.

The LA-Times is in good company with such misleading clichés: As recently as June, 2009, the apolitical, tax-exempt, and eco-friendly National Geographic magazine deemed it gauche-caviar-stylish to attribute the disappearance of Near Eastern Christians to the establishment of the State of Israel and the 11th century Crusades. Gone from this shoddy history were the 7th century Arab-Muslim conquests, and the subjugations, expulsions, massacres, and mass conversions of indigenous non-Arabs. Should our “newspapers of record” and our “scientific and educational journals” tell the Copts’ stories of dispossession, marginalization, persecutions, and impending extinction in light of the savagery that was the 7th century? Should anyone venture to attribute the plight of non-Muslim Middle Easterners to Islamic triumphalism?

There are, however, those who still challenge this re-writing of history. Early 20th century Armenian-American novelist William Saroyan was one such iconoclast; his poignant short story, Seventy Thousand Assyrians, is an example of a decent man’s refusal to commit the aggrieved Near Eastern Christians to oblivion.It can be read like a news item from yesterday’s newspaper; even though it was written 75 years ago, on the heels of the Assyrian Genocide, long before the invention of Political Correctness, at a time when murderers could still be taken to task, and when one could still name names and level a forthright “J’accuse!” without being branded an “Islamophobe.”

Here is how things ended for the Assyrians close to a century ago; and how things might still end for the Copts and other remaining Near Eastern Minorities in our Orwellian universe of newspeak and Political Correctness:

“Seventy thousand,'” wrote Saroyan; “That is all. Seventy thousand Assyrians in the world, and the Arabs are still killing us. They killed seventy of us in a little uprising last month. There was a small paragraph in the paper…..We’ll be wiped out before long. ”

What is at stake in the Middle East today are Copts, Maronites, Assyrians, Jews, and other non-Muslim minorities from the most ancient civilizations — besieged, endangered, in need of our immediate help.