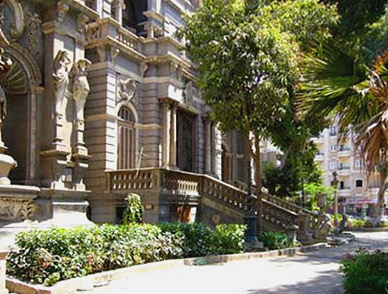 The Sakakini palace in Cairo

Well said, E. Sharaf Eldin. In your article ‘When uncle Elie came back to Egypt’, yours is a voice we hardly hear in the Arab world. Acknowledging the wrongs that were committed towards Egyptian Jews is a brave move. But Eldin’s feelings of regret derive from the Karaite Jew Elie’s ‘Egyptian- ness’, his affinity with his place of birth, the language and the culture. But had uncle Elie now been living in Israel, not the US, would Sharaf Eldin had extended his apology to a Zionist? Could he have brought himself to acknowledge that the Jews are the only oppressed minority able to defend themselves against the tide of fascism sweeping the Middle East ? Food for thought from the Jerusalem Post (with thanks: Lily):

“We have been applying double standards for more than half a century and a stupid fascist tone is now escalating, classifying all Jews as Zionists and all Christians as crusaders. Millions of Muslims are quickly mobilized when an extremist, whether from the East or the West, links terrorism to all Muslims. We dismiss such characterizations as both racist and as unacceptable generalization. Yet, we do the same, giving ourselves the right to generalize about others and sometimes antagonize them.

“On our way to the house where Uncle Elie was born and raised, near the Sakakini Pasha palace, I asked him what was he feeling at this early stage of his return, and he immediately responded, bitterly: “Why are we made to face this? We were born Jews, but also Egyptians, and rejecting us, is tantamount to removing a chapter of Egypt’s history.”

“Then he held his peace. Perhaps he was internalizing the sorry truth that while half a century was enough time for the Germans to repudiate Nazism, for the Italians to throw Fascism into the dustbin of history and for the Japanese to move beyond the tragedy of Hiroshima and Nagasaki, it was all very different for Egypt and the rest of the Middle East.

“Uncle Elie and Mona had grown up and met around Sheikh Qamar Street and Sakakini Square, but everything bar the palace, constructed in 1897, had changed since their day.

“Built by Habib Sakakini Pasha, a Jew** of Levantine origin (sic) whose family migrated to Egypt in the mid-19th century when he was 16, the palace was constructed in the style of a grand edifice he had seen on his travels in Italy and located in what were then the outskirts of Fatimid and Mamluk Cairo. As the slum neighborhoods expanded, it found itself ever closer to the heart of the overpopulated capital. Though encircled today by garbage-strewn, matchbox-style, high-rises, the palace has somehow maintained its grandeur.

“Searching for the house where Uncle Elie had lived, we asked a young man working at a shop on Sheikh Qamar Street for guidance. It turned out that Uncle Elie had lived at this very address, but the original building had been demolished and replaced.

“An adjacent French bakery where the family had shopped was still here, though. Uncle Elie recalled the special loaves it had produced for Jewish festivals. There is no demand for them today; one would not now find a single surviving Jew in the area.

“While Uncle Elie took photographs of his former neighborhood and Mona toured the Sakakini palace, I visualized the two of them here in their 20s, helped by a “soundtrack” of songs by the late Egyptian singer Laila Morad which was echoing from afar: she a charming and alluring young woman, he an exuberant young man, intent on enjoying life.

“At that moment, an elderly local man, Amm Jihad, appeared. He claimed (imagined) to have recognized Uncle Elie, and volunteered to guide us around the neighborhood, focusing his narrative on the changes that had taken place here and nationwide since the officers’ coup of July 1952 that paved the way for Nasser to take power four years later.

“Amm Jihad seemed to remember every building like his own home: That was where the Samhoun family had lived. At the end of the street was the Isaacs’ home. Here was the school the Jews had established, with the Stars of David still recognizable on its façade and walls. And there was an abandoned house, still standing only because its Jewish heirs overseas were contesting ownership.

“Addressing Elie and Mona in the language of simple Cairene, he said: “You were the best. Your days were the most beautiful.”

“The modern era, its intruders and developments, he said, had spoiled everything.

“How sad it was, I added, that the former Egypt of coexistence, not only between Jews and Muslims, but between all Egyptians from different strands and even foreign communities such as Armenians, Greek, Italians and others, had been abducted by adventurers, clowns and propagandists.

“Personally, I believe we owe our Egyptian Jewish brothers an apology for what was inflicted upon them, for the demise of an authentic Egyptian sect that has roots dating back the time of the Prophet Moses. Its members contributed to Egypt’s renaissance in economics, literature and law – all the manifestations of life. But these contributions were not enough to save them from nationalistic and religious maniacs.

“We could have provided the necessary ambiance for them to stay within the country. We had never been in enmity with Judaism nor should we have been. Such enmity is not humane. As far as I know, it is also rejected by Islamic Shari’a law (a moot point – ed).

“Cairo’s prestigious Al-Maady district was established by the Jewish company Al-Delta. That’s why the area’s main streets still bear the names of Jewish families such as Sawares and Qatawi. It was a Jewish scholar who pioneered the study of fine arts in Egypt at the start of the 20th century, and also founded the vegetable marketplace in the district of Bab el-Louk, an architectural masterpiece.

“Local Jews helped pioneer the modern shopping malls here, through brands such as Omar Effendi, Sidnawi, Cicurel and Shamla. Yacoub Sannou was known as “the father of Egyptian theater.” The Mosairy and Edward Levy companies were central to production and distribution in the local film industry. Togo Misrahi was a leading director; Lilian Levy Cohen, “Kamilia,” was a star actress, as was Rachel Abraham Levy, known as Raqia Ibrahim. Negma Ibrahim participated in plays whose revenue was dedicated to the Egyptian army.

“Nazira Mousa Shehata, nicknamed Nagwa Salem, was the only Egyptian artist to win the “Jihad” shield for her role during the War of Attrition. Then there was the legendary singer Laila Mourad, her musician brother Munir and the great artist Dawoud Hosni.

“This talk about Egypt’s Jews, prompted by Uncle Elie’s visit, is not mere nostalgia for a bygone era that certainly will not return. Rather, it is a cause for reflection.

“We have to learn from our errors, as all civilized nations do, including the Germans, the Italians and the Japanese. Otherwise, our descendants will pay the price. And the first step is to end the blame game and acknowledge: Yes, where Egypt’s Jews are concerned, we made a mistake.”

* An exaggeration – there are no more than 30 Jews today
**Sakakini Pasha was most probably a Syriac Maronite, since he built a church and established the Roman Patriarchate in Cairo