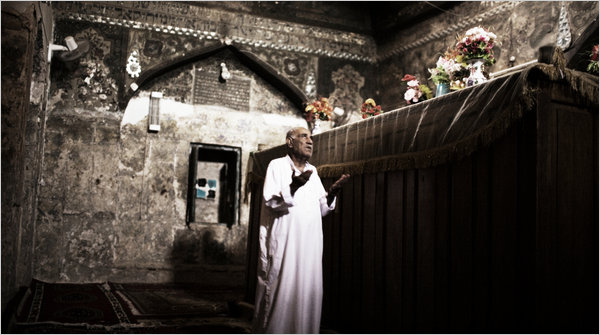 A Muslim prays at the tomb of Ezekiel

The New York Times seems to be having an information blitz on Ezekiel’s tomb…. This article by Steven Lee Myers gives a good overview of the power politics at play to decide the shrine’s future. It seems the ministry of Heritage and Antiquities’ plans to attract mass tourism to Ezekiel’s shrine are on hold until it solves a dispute with the Shi’a religious authorities : (with thanks: Stuart)

In the center of town — and in the middle of a dispute — is the tomb of Ezekiel, the biblical prophet who preached to the Jews in captivity under Nebuchadnezzar in the sixth century B.C. Somewhere near here is where, according to tradition and faith, he saw his visions of God.

Leaders of the town and the province now have a more earthly vision, too: tourism. Iraq remains a country at war, and the town, dusty and strewn with litter — and, the other day, the burned wreck of a car — lacks a single hotel.

Nonetheless, they dream of travelers of all faiths streaming through Kifl — Muslims, Christians and even the Jews, who lived and worshiped here until the last families left by 1951, “because of the problem of Palestine,” said one of them, Zvi Yehuda.

That has thrust the tomb, with its distinctive (and Islamic) conical dome, which dates from the 14th century, into a debate that mirrors Iraq as a whole as it emerges from dictatorship and war.

It is a debate between the competing aims of historic preservation and modern development, between a multifaith history and the increasing sway of Islam, particularly the Shiite branch, whose clerics have their own designs for the site.

“We can prove to the world that this place is one of the cultural places that promote civilization and peaceful coexistence between peoples,” said Qais Hussein Rashid, the director of the State Board of Antiquities, which oversees Iraq’s myriad ancient sites.

He did not say it would be easy.

Late last year the antiquities board began a project to restore the ancient center of Kifl, with the aim of earning a coveted designation as a World Heritage site by Unesco, joining three other places in Iraq: Hatra, Samarra and Ashur.

The historic core includes not only Ezekiel’s tomb and the synagogue around it, but also a precariously leaning 14th-century minaret of a mosque long since destroyed, and a vaulted T-shaped bazaar built in the 1800s under Ottoman rule, when Jews and Muslims lived in relative tolerance, if not exactly harmony.

All are at the center of Kifl’s redevelopment plan, still under consideration and very much contested. A copy of the plan, hanging on the wall of the mayor’s office, depicts modern hotels, restaurants, shops, parks, parking lots and even a boat launch on the Euphrates shore: Kifl in 2030.

“We hope everyone who visits Iraq comes to Kifl,” said the mayor, Khalid Obeid Hamza.

His ambitions are as grand as the Malaysian city he improbably cited, when asked, as the inspiration for the plans.

The plan, like the restoration work, has been greeted with deep suspicion by Kifl’s residents, including the tailors, shop owners and restaurateurs who work in the covered bazaar. Last month Kifl’s residents staged a protest, fearing the redevelopment would force them out.

“If it’s good for my work, but hurts others, I won’t accept it,” said a baker, Malik Ali, expressing fears that hotels and restaurants for tourists would ruin the town’s historic, albeit worn, charm.

He then echoed a familiar Iraqi lament: “I wish the restoration work would start with electricity and water and sewage.”

In fact, the restoration of the tomb and its environs had barely started before it came under attack. News reports early this year that the project aimed to turn Ezekiel’s tomb into a mosque, removing architectural details like carvings in Hebrew, provoked a fury in Israel and beyond.

The reports were false — the carvings remain in place, as do the wooden balustrades that separated the men’s and women’s sections and a carved cabinet that once held the Torah — but the fears were not without some foundation.

Modern plaster, including some with painted Hebrew words and designs, was removed, ostensibly to expose the original stone walls, which have their own designs.

The Shiite council that administers mosques and shrines across Iraq has strongly objected to the restoration, for different reasons.

Its leaders argued both that the initial work was shoddy and that the authorities should be more concerned with excavations to find an undiscovered — and possibly nonextant — mosque where Imam Ali, the cousin of the Prophet Muhammad, tarried in the seventh century before his murder in Kufa and burial in Najaf, just south of here.

“They focus on historical matters,” the Shiite caretaker of the tomb, Sheik Aqil al-Ghraawi, said of the board’s officials and experts. “We focus on both the historical and the Islamic.”

As it is throughout the region, history in Iraq is a battleground in which faiths seek precedence for modern-day claims.

The earliest known references to the Jewish tomb date to the 10th century. Before the establishment of the modern state of Israel, Jews from across the region made pilgrimages to the site, staying in guest rooms that are now ruins.

Muslims, too, revere the site as the tomb of Dhul Kifl, a prophet mentioned twice in the Koran who gave the town its name and who has long been assumed to be the same man as Ezekiel. Millions of Shiite pilgrims travel each year to the major holy sites of Islam here, including Najaf and Karbala. Associating Kifl with Imam Ali would put the town on the tourist map, as it were.

The region’s governor, Salman al-Zargany, who has already clashed with the antiquities board over profiting from tourism at the ancient ruins of Babylon in Hilla, threw his support to the clerics.

“Archaeology is a very nice cake,” said Mr. Rashid, the antiquities board director, “and everyone is taking a piece.”

In June, Mr. Zargany ordered the local police to occupy the site in order to halt the restoration work. Despite repeated negotiations since then, the project remains suspended, though scaffolding now braces the leaning minaret, believed to be part of a mosque that once stood beside Ezekiel’s tomb.

Two weeks ago, Mr. Rashid canceled the rest of the project’s budget for the year, a little more than $500,000, shifting the money to other projects. Mr. Zargany has taken a leave of absence amid a dispute with the region’s provincial council.

Sheik Aqil, the caretaker, despite his fervent belief in the site’s Islamic origins, said that he had no intention of undermining its Jewish heritage.

“It’s a Muslim’s duty to protect it,” he said during a tour of the tomb, interrupted by midday prayers. On the walls are old photographs of the Jews who once prayed here. “We take care of the Islamic and the Jewish,” he went on. “It is the history of all Iraq.”