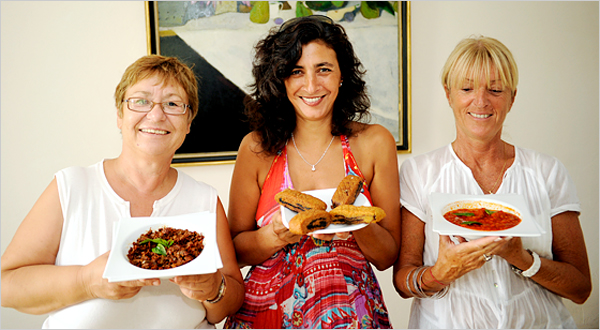 At Rosh Hashana – the Jewish New Year, which kicks off tomorrow evening with a sumptuous family meal – thoughts turn inevitably to food. But French Jewish festival food has undergone a revolution, thanks to the influence of Jews from North Africa, who have breathed new life into the community. The New York Times reports : (with thanks: Michelle)

Corynne Mas said the pastries she makes for Rosh Hashana were like teiglach, Eastern European cookies covered with nuts and honey.

But the version she’ll give her family when the holiday starts next Wednesday night will be stuffed with spiced dates and scented with orange flower water — Middle Eastern touches her mother, a French Jew with Eastern European roots, would not have recognized. They are called makroud, something she learned from her mother-in-law, an Algerian Jew.

Most of the dishes Ms. Mas cooks are North African. And when she gets together with her good friends Carole Chaouat and Cathy Levy, North African Jews, the food they share is more likely flavored with harissa, cumin and honey, than horseradish, dill or sugar.

The culinary transformation Ms. Mas experienced would feel familiar to many French Jews. About a quarter of the 300,000 Jews in France before World War II died in the Holocaust, and others later left for Israel or the United States. But as independence came to the former French colonies of Morocco, Tunisia and Algeria in the late 1950s and early 1960s, many more Jews emigrated to France. The customs they brought came to define French Jewish food.

Ms. Mas, 54, said she was not raised with an appreciation for her Jewish background. “I have learned everything from my Algerian mother-in-law,” she said. “The Sephardic Jews are attached to their religion and are refueling Jewish life in France.”

Many of these Sephardic dishes actually have centuries-old roots here in southwestern France and Catalonia, from before Jews were expelled and settled in North Africa. Jewish cooks here still use the ingredients of those ancestors — anise, olive oil, rose water, and pine nuts — reimagined on stovetops in Marrakesh, Oran and Tunis.

The physical traces of these traditions here are literally cast in stone in the remains of Jewish quarters in nearly every town — Hebrew letters on a grave, the indentation on the right side of an ancient doorpost indicating a once-posted mezuza, names like Rue de la Juiverie or Rue de Jérusalem found on cobblestone streets.

But new synagogues in Perpignan, or nearby in Narbonne and Béziers, have only initials in French outside the door: A.C.I.N., for Association Culturelle Israélite de Narbonne. There is no clear indication to the passer-by that these are Jewish houses of prayer.

Ms. Mas; Ms. Chaouat, 54, born in Tunisia; and Ms. Levy, 45, born in Morocco, grew up in Perpignan, a center of Jewish culture during the Middle Ages. It now has about 450 Jewish families.

As the women gathered beneath an almond tree on the patio of Ms. Mas’s home, Ms. Chaouat served a potato salad, dipping two fingers in a jar of harissa and dabbing at the potatoes she had prepared, as she would do with other cooked vegetables.

“This is the way we share recipes,” Ms. Chaouat said. “Food is our identity, tradition and our roots.”

Each group of immigrant Jews brought its own influences.