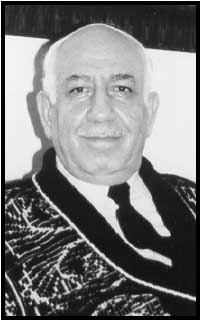 One must not speak ill of the dead, but the lies and fabrications Naiem Giladi spread while he was alive – he died in March 2010 – will live on unless they are challenged. Here’s my attempt to rebut some of Giladi’s claims published byThe Linkin its April-May 1998 issue, found on an Islamic site.

Naiem Giladi was born in Baghdad and joined the Zionist underground as a teenager. He was jailed by the Iraqis for smuggling Jews out to Iran, arriving in Israel in May 1950. Something happened to turn Giladi against Israel, and he became active in fighting racism in Israeli society, joining the 1970s social protest movement, the Black Panthers. Becoming a US citizen in the 1980s, Giladi self-published Ben Gurion’s scandals blaming ‘cruel Zionism’ for scaring Jews, who were otherwise content living in Arab countries, into leaving Iraq. His claim that Zionist agents set off bombs became a staple of anti-Zionist propaganda.

Early on in the interview, Giladi gives a potted history of the Jews of the region. “Although Jews like other minorities in what became Iraq, experienced periods of oppression and discrimination depending on the rulers of the period, their general trajectory over two-and-a-half millennia was upward,”he writes.

In fact Jewish fortunes waxed and waned through the ages, through invasion, plague and flood, and the period in the 19th century, before the dawn of the colonial period, was probably the darkest.

“About 125,000 Jews left Iraq for Israel in the late 1940s and into 1952, most because they had been lied to and put into a panic by what I came to learn were Zionist bombs”, Giladi claims.

According to Giladi, ‘The principal interest Israel had in Jews from Islamic countries was as a supply of cheap labour, especially the farm work that was beneath the urbanised Eastern European Jews“: this assertion is contradicted by the fact that the kibbutz farm movement was established by Eastern European Jews. It was the Iraqi Jews who were urbanised, resettling in the towns of the centre of Israel.

Undeniably, there was discrimination against Jews from Arab countries and other newcomers in Israel. But most of the feelings of bitterness were caused by the inability of the state to adequately provide for the half million immigrants that were absorbed soon after its creation, including Holocaust survivors and Jews from Arab countries. The new state had no money. Many of the immigrant had no marketable skills. Some had never seen a flush toilet or a cooking stove and didn’t know how to use them. A vast absorption program was needed, but there were not even adequate funds for housing. New immigrants were housed in tents, and later in small communities of poorly built prefabricated houses – “ma’abarot”.

Giladi then charges Israel with using bacteriological warfare to rid itself of as many Palestinians as possible. Jews poisoning Gentile wells – where have we heard that libel before? The source of Giladi’s allegations is apparently an account by the controversial ‘historian’ Uri Milshtain, who made the fantastical claim that Israel poisoned the wells in all Arab towns. Two members of the Haganah dressed as Arabs apparently crossed into Gaza to put two cans of bacteria, typhus and dysentery in the water supply. According to one Israeli scholar, they added oil, not bacteria. There was a typhus epidemic in the town of Acco before it fell in May 1948, but it is thought to have broken out after the electricity supply was disconnected and the water supply cut off. The Arabs re-opened disused wells and this might have caused the epidemic.

The decisive incident that turned Giladi against Israel was when he was sent to Room no 8: the department of Jews from Islamic Countries at the headquarters of the Mapai party. He brands it ‘a Negroes department’. (Thousands of Arabic-speaking Jews went into intelligence – was that stereotyping or segregation, or Israel just making the best use of talent available to the state?)

The scenario that Israel discriminated against its citizens from Islamic countries requires a whitewashing of Arab antisemitism. (“We Jews from Islamic lands did not leave our ancestral homes because of any natural enmity between Jews and Muslims”.) We get it here in Giladi’s account of the 1941 Farhud in which 180 Jews were murdered. “The riots were most likely stirred up by the British in collusion with a pro-British Iraqi leadership”, he claims.

While the British were indeed guilty of failing to stop the two-day killing spree of June 1941, they were not guilty of starting the trouble, as Giladi claims. So keen is Giladi to exonerate the Iraqis from blame that Giladi does not even mention the pro-Nazi sympathies of Rashid Ali al-Gilani, who engineered a coup in May 1941 with the support of Hitler’s ally, the Palestinian Mufti of Jerusalem, and military help from the Axis. At the time the British were engaged in a fight for control over Iraq. They had bigger fish to fry – fighting Axis bombers, bombing Iraqi forces, securing the Iraqi oilfields and protecting their own civilians – than than to stir up riots against the Jews.

Giladi’s story of how the British sent in the Ghurkas to loot a Jewish district in Basra has no basis in fact. For the entire month that they were in power, Rashid al-Gilani and his pro-Nazi cohorts taunted the Jews with incitement, sporadic attacks, and a plan to deport them to camps in the desert. The tension was such that the Jews were advised not to leave their homes on the eve of the riot.

Giladi presents Jews uniting with Muslims to defend themselves against rioters in Baghdad. While the British could be faulted for letting the violence go unchecked for two days, Giladi turns the facts on their head by making the Arab rioters, many of them armed, into co-victims – when they were the looters, murderers and rapists (although some Muslim neighbours did save Jews). Giladi’s fantasy, supported by some mysterious Armenian eye-witness, that British agent provocateurs were being treated in the Baghdad hospital alongside Jewish riot victims, strains credulity. Rashid Ali having fled, the British army was camped outside Baghdad, under express orders not to escort the returning Regent into the city. What really happened in the Baghdad hospital was that Jewish women were threatened with rape and wounded Jews threatened by Iraqi soldier patients – to the point where they had to be taken to the Jewish hospital for their own safety.

Around 12,000 Jews or ten percent had escaped illegally through Iran by the time the Iraqi Prime Minister Nuri al-Said decided to legalise Jewish emigration in March 1950 (tempted by the prospect of the spoliation of Jewish property), on condition the Jews renounced their Iraqi citizenship. A year later, the Iraqi government passed a second law confiscating Jewish property.

At first the Zionist movement hesitated to encourage Jews from registering to leave, fearing it was a government trap. It was too dangerous for Jews to leave via Iran, and arrangements for the airlift to Israel (at first via Cyprus) were not in place until about six weeks later.

When it comes to the notorious ‘Zionist bombs’, Giladi – who was not in Iraq at the time – gets his chronology all wrong: he claims the first bomb went off in March 1950 in the American Cultural Centre and Library. In fact this bombing took place in 1951 and injured four. The bombs at the Lawi automobile company and the Stanley Shashoua showroom went off in June 1951, and not in 1950, as Giladi claims. Neither caused any casualties. All these incidents had no bearing on the emigration as they occurred after the deadline for registration had expired in March.

Giladi does get the date of the only fatal bombing right – that of 14 January 1951 at the Massouda Shemtov synagogue, an emigration registration centre, where a bus full of passengers was waiting to leave for the airport. Aside from the dubious benefit to the Zionist movement of bombing Jews who were already leaving, or registering to leave Iraq, there is evidence linking the Istiklal nationalist party to this bombing and the type of grenades used to the police. The Muslim peddlars in front of the synagogue mysteriously vanished moments before the explosion, which killed two children and an adult.

An Israeli commission of inquiry in 1960 cleared Mordechai Ben Porat, the Zionist movement leader, of any involvement. Ben Porat argues that the bombs coincided with other political events in Iraq. “Iraqi Jews registered for emigration at such a rapid pace that no elements whatsoever, and certainly not the Zionist movement, or Israel, had any reason to accelerate emigration by reverting to such inane acts as that of using explosives,” Ben Porat writes in his memoir To Baghdad and Back. In fact the Jewish Agency in Israel was pleading for the emigration to slow down, as Israel, already dealing with an influx of Rumanian Jews, did not have the ability to absorb the Iraqi Jews in any great numbers. “We don’t even have tents. If they come, they’d have to live on the street,” Levi Eshkol, treasurer of the Jewish Agency, told the Zionist emissary Shlomo Hillel.

The two Zionist activists arrested and hanged in January 1952 by the Iraqi authorities were never charged with the synagogue bombing, as Giladi alleges. By the time of the incident, 100,000 Jews – the vast majority – had relinquished their Iraqi citizenship in anticipation of their exit; Iraq’s gates would slam firmly shut two months later.

Timeline to disaster for the Jews of Iraq