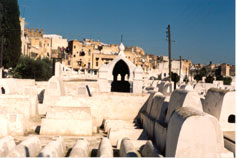 The Moroccan Tourist Office could scarcely have hoped for a better puff piece than Gideon Levy’s (yes, the Gideon Levy) Haaretz article. The scourge of ‘the Israeli occupation’ seems to have found his model for ‘peaceful coexistence’ in Morocco (with thanks: bh):

“The cemetery was established hastily by the Jews when they were compelled to move it from a nearby site, but today it is better kept than any of the old Muslim cemeteries in Israel. Here is the grave of the rabbi whose son is a bank clerk in Netanya, here the last resting place of a girl who died for her faith. The former Azoulay Street in the mellah now has an Arab name, like all the other streets that once bore Jewish names, but the synagogue in the heart of the quarter has been superbly restored − at the initiative of Andre Azoulay, of course. There are only about 60 Jews left in Fez; our slaughterer, who is well into his sixties, is one of the youngest. Sabag is considering immigration to Israel: his son has arranged a job for him as a kashrut supervisor in an Eilat hotel.

“Some of the Jews we met, notably our escort, Senouf, dream of applying the Moroccan model to the Israeli-Palestinian conflict. A colorful, charming figure, Senouf is now planning a project in which Israelis and Palestinians will come to Morocco to study the nitty-gritty of coexistence together with Moroccans. But in Morocco, as elsewhere, the Jewish community, which numbers only about 3,000 souls, does not speak in one voice. At the Ifrane conference, for example, Simon Levy, a communist and the director of the Museum of Moroccan Judaism in Casablanca, likened the Israeli occupation in the territories to Nazism. He also reminded the audience that the greatest massacre of Jews in history was perpetrated by Europeans, not by Arabs. Andre Azoulay told the gathering: “I have been a Moroccan for 3,000 years. I am a Moroccan and a Jew. Here in this country Jews and Muslims are brothers. We are the only ones who can say this.”

“Morocco is a wonderful country, a land of contradictions and contrasts: the explicit and the mysterious, the overt and the veiled. There is much less interest in the Palestinian issue than one might expect − domestic issues are more acute: democratization, the economic situation, the faltering education and health systems, the Moroccan diaspora and the disputed Western Sahara, which no one dares mention. The economic and social situation is a faithful reflection of the kingdom’s geographic location − between Europe and Africa.”

My comment: Never mind that our starry-eyed Gideon’s hosts are rich Jews who can afford to extol the virtues of Moroccan ‘coexistence’. Note they almost all have that second home in Israel, just in case they need to make a quick exit, come the revolution. Royal adviser – some would say ‘court Jew’ – Andre Azoulay is seriously discombobulated by being called a Zionist agent: perhaps he has suddenly realised the limits of coexistence, and is regretting having sold his villa in Israel.

So the Jewish cemetery in Fez is beautifully kept and the synagogue restored – but with 90 percent of the Jews of Morocco gone, the Muslims are coexisting with dead Jews and empty Jewish buildings, which have their uses as tourist attractions. Before the French arrived in 1912, coexistence meant intimidation, constant humiliation as dhimmis, pogroms, and coercion by the Muslim majority. The girl ‘who died for her faith’ was Solika, the 19th century martyr, who chose to die a Jewess, rather than convert to Islam. It is her bitter legacy that Gideon Levy needs to confront.

There is no future for Jews in Morocco. Even Sabag, the kosher slaughterer, is setting up his next job in Israel. Anyone but Gideon Levy can see that coexistence between a dwindling 3,000 Jews (where there were once 300,000) and the Muslim majority, has been a dismal failure.