Russian-born Rochel Pinson and her late husband, Rabbi Nissan Pinson, were sent by Chabad-Lubavitch to educate Jewish children in Tunisia. They ended up staying over 50 years. Fascinating article by Barbara Bensoussan of Mishpacha magazine (with thanks: Daniel):

“We arrived in Tunis in 1959,” Mrs. Pinson recalls. “And it really was a desert as far as Judaism was concerned!”

This was a serious challenge, for there was so much work to be done in an Arab country not so hospitable to Jews.

“There was no strong Torah education. Because of this, the chief rabbi of Tunisia was very happy we had come to lend a hand.”

Many of her new Sephardic friends had a hard time believing the newly arrived Mrs. Pinson was even Jewish. In Tunisia, the more religious community was located on the island of Djerba. “They’ve been there since the destruction of the Second Temple,” says Mrs. Pinson. “It’s a unique, ancient community. Today thousands of tourists flock to Djerba, especially for the festivities on Lag B’Omer. I’ve often gone there myself for Lag B’Omer; it’s something to see.”

The Jews in Tunis did not live in enclosed mellahs, a walled Jewish quarter, like the Jews of Morocco. “Most of the French people lived in suburbs of the city. Our area was Arab with Jews mixed in.” 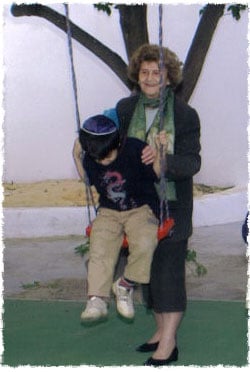 When asked about the quality of life, she answers matter-of-factly, “Well, we didn’t live in luxury; we got by. We had exactly what we needed, not more and not less — normal living! I had a Jewish woman who used to help care for my children, and household help was very cheap.”

Mrs. Pinson says she did her best to make a good impression on the locals, Jews who were traditionally observant, but strongly influenced by French culture. She took care to dress well and introduce herself to everyone as she went about setting up the school and hosting lectures in her home.

But with her fair skin and Ashkenazi accent and customs, many of her new Sephardic friends had a hard time believing the newly arrived Mrs. Pinson was even Jewish. “The ladies would say to me, ‘You mean you don’t cook couscous boulettes [couscous with meatballs] on Friday nights?'” she laughs. “‘Then how can you be Jewish?'”

But she made believers out of them when she and her husband built a new mikveh, a ritual bath,and opened a Jewish day school, Ohr HaTorah (and later a high school, Oholei Yosef Yitzhak).

“When we started, we had only 33 children,” says Mrs. Pinson.

“But before long, we had over 300.” The street where the school was situated bore the name, appropriately, Rue de Palestine.

The years following the establishment of the State of Israel saw the flight of some four-fifths of the country’s original 250,000 Jews. After the Six Day War, dangerous rioting broke out among the Arabs. “They went around breaking things, and threatening to kill the Jews. They even burned 84 hectares of land.” The Great Synagogue of Tunis was ransacked, several Torah scrolls were burned and desecrated, and Mrs. Pinson remembers that “90 holy books from our synagogue were destroyed.”

Despite all their years in Tunisia, the Pinsons were never granted citizenship. On that terrifying day, the rioters burned the matzah factory, then came to the school threatening to destroy Rabbi Pinson’s car (they pulled back when he came out in full rabbinic regalia and calmed them down). Nevertheless they surrounded the school, forcing Rabbi and Mrs. Pinson to secretly evacuate the students out the back. “The parents were terrified until all their children got safely home,” she remembers. After those terrible moments, even more Jews packed their bags and left the country (as of today, only 1 percent of the original population is left).

During the period that followed, Rabbi Pinson was accused of being an Israeli spy, despite the fact that he had never set foot in Israel. His passport was confiscated for three years. Despite all their years in Tunisia, the Pinsons were never granted citizenship; when their son got married in New York, they were refused permission to travel to the wedding (in the end, the authorities relented and allowed them to go for the celebrations after the wedding). Their phones were tapped and their private conversations listened to, causing their Rebbe to reportedly remark, “It’s worse there than in Russia.”

The Tunisian government regularly provided their school with police protection and their synagogue with armed guards when hostilities flared. Danger pursued Tunisia’s Jews throughout their stay. Chacham Matzliach Mazouz, a rabbi and author of many Jewish volumes, was murdered in 1971 by an Arab gunman in Djerba. In 1982, following the war in Lebanon, the Pinsons discovered they had a distinctly unfriendly new neighbor occupying an office in the building next door to their school: Yasser Arafat, the head of the Palestinian Liberation Organization, freshly kicked out of Beirut!

“One day, my husband went to see somebody in that office building, and by mistake he walked straight into Arafat’s office!” Mrs. Pinson remembers. “The secretary just looked up and said, ‘No, you’re in the wrong place,’ and went back to what he was doing.” But despite the presence of an enemy on the block, no physical harm ever befell the Pinson family.

Many less hardy souls, raising a family of five children, would have used these dangers as a good excuse to beat a hasty retreat. Not so the Pinsons. I ask Mrs. Pinson, “Weren’t you ever afraid to stay there?”

She answers with a verse. “We learn that G‑d carries His children on eagles’ wings,” she says. “The eagle raises the Jews above all the dangers below. We also felt ourselves to be on eagles’ wings, flying high through serving G‑d, and protected by it.”

“I love Jews!” she declares. Which leads me to wonder if, despite the difficulties, Mrs. Pinson didn’t perhaps develop an attachment to this Mediterranean country after so many years; it is a place that has been described by others as a land of sunshine, beaches, and bright colors. “Did you come to love Tunisia, even though you didn’t want to go at first?” I ask.

Her answer is almost brusque in its directness: “I love Jews!” she declares. “I love the Jews of Tunisia, and I’ll do whatever is necessary to promote Torah and Judaism.”

“We spent two generations planting Torah in a desert,” she says. “We still have a job to keep it going.” Sadly, the “we” no longer includes her beloved husband, Rabbi Nissan Pinson.

He passed away two years ago at the age of 89. “This past Chanukah, a Torah scroll was dedicated in his memory in Paris,” she says. “His students[many of whom have since moved to France] were so very, very grateful for all he had done for them.”

By now, the Pinson family has had a presence in Tunisia for over 50 years. Today the Jewish population is dwindling; the protection of the French colonialists is gone, so between that and the Arab-Israeli conflict, most people have chosen to live in France or Israel. The school that once boasted over 300 pupils is now down to 60. But Mrs. Pinson nevertheless continues the work that she and her husband initiated —overseeing the school, hiring new staff, inspiring students and teachers – with the frequent help of her son, Yosef Yitzchak. “I travel to Tunisia every two or three months,” she says. “Yes, it’s tiring, but we have to stay on top of things. Fortunately, between the telephone and fax machine, I don’t need to be there all the time.” The American Joint and Chabad-Lubavitch contribute much to funding the school.