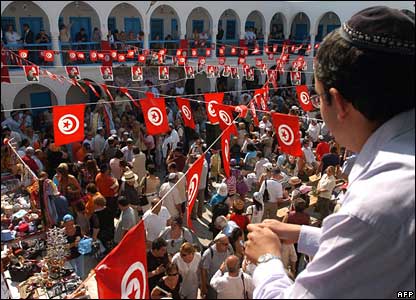 The scene at the height of the annual Al-Ghriba pilgrimage (photo: AFP)

Antisemitic feeling seems to be mounting lately in Tunisia, one of the more ‘moderate’ of Arab states: an opposition party has called for the government to ban Israeli tourists from coming to the island of Djerba for the annual three-day Lag La’omer Al-Ghriba pilgrimage, due to begin on 30 April. And last Friday, two Israeli contestants were refused visas to a judo competition being held in Tunisia.

On 14 April Maya Jribi, the secretary-general of the leftist Progressive Democratic Party called on the government to ban Israeli tourists from the pilgrimage to the Al-Ghriba synagogue on the island of Djerba, one of the highlights of the Tunisian tourist calendar. The pilgrimage traditionally attracts thousands of tourists from France and Israel.

The two judokas, Arik Zeevi et Alice Shlessinger, were refused entry to heats leading up to the European championship. Arik Zeevi is himself of Tunisian origin. The Israeli Judo Federation is appealing to the World Federation, claiming the ban ‘is against the spirit of sportsmanship and unfairly singles out Israel.’

In an altogether more bizarre instance of Tunisian bigotry, journalists and intellectuals lambasted Mohamed Zran for including a sympathetic portrait of a Jew in his documentary film Zarzis (Vivre Ici).

Critics objected to the fact that the Tunisian Jew Simon, a grocer and chemist,was ‘projecting a positive image of the Jews, while Jews themselves denigrate the image of Arabs and Muslims’.

According to Souhail Ftouh, a Tunisian who runs a pro-Jewish website:,”this is just one more pretext provided by the Israel-Palestine conflict to demonise the Jews and present them as devillish and perverse. These (intellectuals) find their inspiration in the worst of sources, the Protocols of the Elders of Zion, the obscene cartoons in the Arabic press, the overblown programmes on the Hezbollah TV channel and the warlike preaching of racist and hysterical commentators (… ) It’s sad for the whole of Tunisia because there is no excuse for the preaching of hatred, aversion, contempt, disdain and lack of respect. People like this brought on the Holocaust.”