As Jews all over the world prepare to mark the Passover Exodus from Egypt, spare a thought for those Jews who endured a recent exodus from Arab and Muslim lands. Israel Highway reports.

“As Passover approaches, Jewish families the world over are preparing to come together for the traditional Pesach seder commemorating the Jewish people’s Exodus from Egypt approximately 3300 years ago. While the Exodus is a universally known event, not that long ago there was another, less known, mass exodus of Jews from the Arab world to Eretz Yisrael. This time the Jews were fleeing modern day despotic rulers of the Arab world and this time they were arriving on the shores of a new, modern State of Israel.

“These Jewish communities had grown and often prospered throughout much of the Middle East and North Africa from as early as the destruction of the first Temple in Jerusalem in 586 BCE. On the eve of the birth of the State of Israel, in 1948, there were approximately one million Jews living throughout the Arab/Muslim world. Through forced emigration, pogroms and natural attrition, the once great Jewish communities of the Arab world have dwindled to no more than 10,000-12,000 scattered remnants. This mass migration from Iraq, Syria, Egypt, Yemen, Morocco, Tunisia and Algeria, among others, has left most of the Arab world virtually devoid of the Jewish presence.

Read article in full(scroll down)

This Canadian Jewish News interview with Menashe Amir of Israel’s Farsi radio service shows that Jewish life in Iran is not all it seems (with thanks: Albert):

“Superficially, everything is fine,” Amir said of Iran’s Jewish community. “They have security. They have their businesses. They make a good living. Alcohol is forbidden for Muslim society, but permitted for Jews (for kiddush) and two Jewish schools are left. Every Jew can leave Iran anytime they want.

“But all these are superficial. In fact, the life for Jews in Iran is threatened. There is a great anti-Semitic propaganda, even on Iranian official TV and radio.”

The Jewish schools are run by Muslim principals and most of the teachers are Muslims. Torah studies are conducted in Farsi, not Hebrew, even by Jewish teachers.

His review of school texts suggests their treatment of Judaism “is very superficial. There is data and numbers, but nothing of the essence of Judaism.”

What’s more, “Jewish schools must be open on Shabbat by government order.”

Beverly Hills made history on March 6 when Jimmy Delshad, a 66-year-old Iranian Jewish immigrant, was elected mayor. It’s certainly a coup for the man formerly known as Jamshid Delshad, who was born in Shiraz and moved to America when he was 19 to attend college. He settled in Beverly Hills in 1988 and has called the city home ever since.

“I’m unbelievably excited,” Delshad says in a living room filled with glossy coffee table books, including several Haggadot and Jewish art books. “It’s like a dream come true, and shows that the American dream is alive and well.”

Sir, – Historically, the only successful way hostilities between mixed populations have been resolved is via population exchanges: between Greece and Turkey in the 1920s, between India and Pakistan in 1947 and, closer to home, Cyprus in 1974. A lot of suffering was caused – but far less than the alternatives in Lebanon, Kashmir and Sri Lanka.

With Israel’s establishment there was also a population exchange between local Arabs and Jews from Arab lands. This should be the refugee formula.

After 59 years almost all the displaced inhabitants have died. Yet, somehow, their “right of return” has been inherited by succeeding generations. If so, we Jews, whose ancestors are the original refugees, are here exercising our far more ancient and deeper right of return!

Whatever the local Arabs have chosen to call themselves, they are part of the Arab world, as we are continually reminded.

Collectively Arabs have about three times the area of Europe – some of it floating on oil – with only half its population.

Arabs have hardly been wronged as regards land allocation – so what’s with their perennial bellyaching? 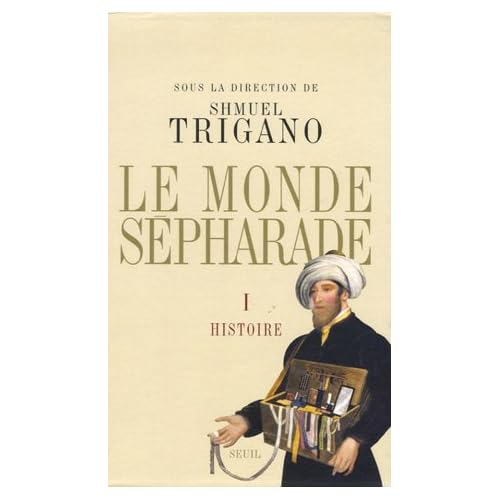 The recent publication of the first study of its kind, Le monde sepharade – Volume 1 (Histoire) and 2 (Civilisation)– is the occasion for an-depth interview in French in Canadian Jewish News with its author, Shmuel Trigano, professor of sociology at the Paris university of Nanterre and leading expert on the Sephardim. Here is the gist of what the professor had to say:

Trigano believes that the Sephardi world is at a crossroads. It is a world which was profoundly shaken up and dislocated by the sinister events of the latter half of the 20th century. More worryingly, Sephardi institutions are not geared up for continuity or to transmit their unique Sephardi identity. In fact Sephardi identity may disappear altogether.

There is a rich Sephardi tradition very different from the Ashkenazi. Sephardim must not dwell cloistered in the nostalgia of the past, but think of creative ways of passing on their very different experience of politics, mysticism and philosophy.

Jews and Sephardim have no clue about their history. They have a short-term perception of themselves as victims. That is why the book meets an urgent need to build a picture of the Sephardi past. The authors have also restored Judeo-Arabism to the Sephardi world. To amputate the Jews from Arab countries would be like cutting off the Jews of Galicia from the Jews of Germany.

Sephardi liturgy is alive and well, but there are virtually no Sephardi Yeshivot left. Sephardi culture is in a lamentable state. There are libraries in private homes housing valuable manuscripts which have never been edited or published. The Israeli government did support heritage initiatives in the 1980s, but it’s not enough. What we need is a blueprint. It’s not simply a matter of collecting the costumes of a bygone age, we have to build a vision for the future.

The Sephardi world has no real leadership. Sephardi leaders are nice enough people, but they have no vision. When a Sephardi leader gets involved in the community, he has no clue of the intellectual and cultural dimension of the Sephardi tradition. In the USA, wealthy Jews have endowed university Chairs, research centres, libraries. When a Sephardi practises philanthropy, he plays to the gallery.

Multiculturalism is in vogue in Israel but Trigano finds the Sephardi revival puzzling. It is the stuff of folklore, a stage set. Where is the content? Where is the Sephardi intellectual and literary output? It’s not just a matter of transmission but of re-invention. The Sephardim don’t speak Arabic anymore: they must re-invent new cultural instruments.

Sephardim have made headway in politics, but at what price? That is the question. Shas follows a Lithuanian model, not a Sephardi one. They have rejected their ancestors’ spiritual heritage and made Judaism into a monolith. Shas’ leaders are above all Lithuanian.

It is a leftwing myth that Sephardim are better disposed towards making peace with the Arabs. The Sephardim have suffered in the Arab-Muslim world, whence they were unceremoniously put to flight. Their property was seized. As long as this source of tension between the Sephardi and the Arab world is not put on the table and settled, it will always stick in the craw. There will not be peace as long as the Arab world has not recognised its responsibility for this sinister chapter in Judeo-Arab history. The Israeli left will not admit it, because it has no clue of the experience of the Sephardi world, nor any respect for it: it is a convenient symbol enabling self-hatred and an assumption that Jews lived an idyll in Arab-Muslim society. It’s not true. (My emphasis – ed)

The Golden Age is an absolute myth. When Trigano was a doctoral student, he found in the Archives of the Alliance Israelite Universelle a document written by a French emissary in Morocco about the ‘vale of tears’ before the Protectorate. Perhaps Morocco has good intentions, but don’t tell us that the history of the Jews in Islamic lands was an idyll, it’s a lie. Travellers’ accounts, Jewish stories, elegies, all point to something unbearable, except for rare periods of peaceful coexistence. When a new Arab ruler took over, he needed the Jews. As soon as he was settled, they became his enemies. One must distinguish between the pre-colonial and the post-colonial period. For the Jews, the colonial period was a liberation. Unfortunately, they have short memories.