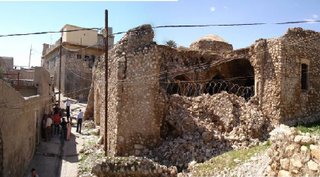 Exclusive to ‘Point of no return’ – this photograph of the tomb of the Biblical prophet Nahum at al-Qush in northern Iraq, now in urgent need of restoration and repair. (The tomb itself is underneath the archway behind the rubble).

The Jewish Quarter of Al Qush, including the synagogue, is in a poor state of repair. The remains of this quarter are, in parts, more than 2,000 years old. In the centre of the synagogue – on the edge of the quarter – is a simple plaster tomb topped by a green silken coverlet. On the walls are Hebrew inscriptions, some as old as 4,000 years. This tomb is purportedly the tomb of Nahum himself, although there are two other possible burial sites, one in ancient Israel and one in Judah.

The prophet Nahum is only mentioned once in the Bible. Like his predecessor Jonah, he warned that the people of Nineveh had quickly reverted to their cruel and heathen practices and that the kingdom of Assyria was doomed to destruction.

The Assyrian king Shelmanassar II is thought to have brought thousands of Hebrews to Northern Iraq in the 8th century BCE. Some families settled in Al Qush, living peaceably alongside the native Alquoshniye, followers of the Moon God Siin and the goddess of love and war, Nanna. Al Qush became a major place of worship for both religions, until Nestorian Christianity was introduced to the Alquoshniye.These Christians abandoned the Nestorian faith in the 18th century, and are now known as Chaldean Catholics. The peoples of both religions suffered equally at the hands of various external attackers throughout history.

From 1930 onwards, the Jews throughout Iraq were subjected to increasingly oppressive laws, and after 1948 the last of the Jewish population left Al Qush. The rabbi handed the keys of the synagogue to the next-door neighbours. Al Qush now almost exclusively comprises Chaldean Christians.

The roof of the synagogue has now partially collapsed and adjacent buildings (pictured below) are in a sorry state of repair. A contractor has produced a plan for the repair and restoration of the site, but unless something is done urgently, another piece of Iraq’s Jewish history will have been irretrievably lost. 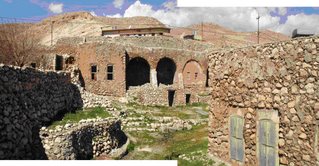