US Senator George Allen did not know until recently that his mother was Jewish – not only Jewish, but Tunisian-Jewish. Haaretz reports:

“The new book by Robert Satloff, the director of the Washington Institute for Near East Policy, enjoyed a moment of unexpected relevance this week. Before it even reached the bookstores – the book, which deals with what befell North African Jewry during the Holocaust, is scheduled for publication in about a month – the author was asked to comment urgently on the history of the Lumbrosos, a Tunisian family, in the period of the Nazi occupation. It turns out, incredibly, that one of the family’s descendants is currently a United States senator.

(…)”Thanks to information from the Lumbroso group,” writes Jacques Sabille, no fewer than 17 German transport planes were destroyed. Sabille wrote the authoritative 1954 book “The Jews of Tunisia Under Vichy and the Occupation,” which Satloff quotes. Sylvain Lumbroso, who established the group of Tunisian Jewish insurgents, received a medal for his action.

“Sen. Allen’s maternal grandfather, Felix Lumbroso, was arrested and held by the Germans, but he survived. Satloff does not know his exact relationship to Sylvain Lumbroso, the war hero, as he explained this week in writing about the family, but he believes there is a “high probability” they were related. The Lumbrosos are an important family of Jewish leaders in Tunisia.”

More on the Lumbroso family in The Forward

This report by Larry Derfner of the Jerusalem Post seems to contradict Wikas’ account immediately following. The Iranian Jews have ‘never had it so good’ economically, and are so impervious to the antisemitism around them that they believe they can work through anything. (With thanks: Albert).

“In telephone interviews with Kamran, Shahnaz and other former Iranian Jews, a picture emerges of a 2,000-year-old community that has become so steeped in denial since the 1979 Islamic revolution, and so adept at walking between the raindrops, that they believe they can keep on maneuvering even through the Ahmadinejad era – which has brought a little more rain their way, but not, after all, that much more.

“In fact, except for the few recent anti-Semitic and anti-Zionist incidents … , life for Iran’s Jews has not changed substantially for the worse with the new president, even though outsiders assume that his Israel-hating, Holocaust-denying obsessions have the community panicked, as if a noose is closing around its neck.

“Shahnaz even sees economic signs that Iran’s Jews, or rather its middle-aged and elderly Jews, are planning more decisively than before to live out their lives in Iran, possibly as a result of the economic growth brought on by sky-high oil prices.”

The Jerusalem Post sent Seth Wikas to Tehran. Here’s a taster of what he saw and heard (You can read the full article here):

“For many older people like my host Fayzlallah Saketkhoo, the vice president of Teheran’s Jewish Association, Iran is simply their home. As the owner of a successful carpet and souvenir shop, Saketkhoo has provided well for his three children, and devotes a good deal of time to Jewish Association activities. At his home on Friday night after services, where he showed me his collection of Kabbala books and a large tapestry of Moses splitting the sea, he told me about how he had traveled around the world only to learn that nothing was better than home.

“Asked about the future of the Iranian Jewish community, he replied: “Did you see how many children were there tonight?”

“He was right. It was hard to concentrate on praying in the synagogue, where at least 300 people had come, because of all the children running up and down the aisles and chattering outside.

“But there is a difference between children and young adults. Peyman, Saketkhoo’s 27-year-old son, was fond of saying, “Everyone in Iran has a problem,” meaning that everyone – Jewish and non-Jewish – wants to leave.

“It’s not just the political situation, he said, but the fact that with the rise of Ahmadinejad, the economic situation has worsened and poverty has deepened. For college graduates, it is hard to find jobs in their field; Peyman is an architect by training but works in his father’s shop. As he and other young Iranians attest, both the political and the economic situation are getting harder to bear.”

The Yemenite Golus (galut – exile) is possibly the most exotic

story in the annals of Jewish history. The first question that comes to mind is: How — and why — did Jews get to such a backwater as Yemen?

Nehama C Nahmoud wrote a series of four articles in 1997 – 98 for the Jewish World Review about the origins and treatment of the Jews of Yemen.

You can read Part I here, Part IIon the Jewish kings of Yemen here, and Part III on the Muslim period here. (Nahmoud wrote a Part IV but it does not seem to be posted on the Internet.) 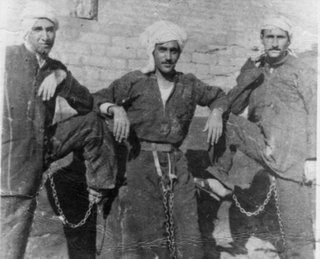 Harif, a UK association of Jews from the Middle East and North Africa, is launching its autumn programme with a showing of two films by the Israeli director of Iraqi-Jewish origin, Duki Dror.

The films, which will be screened on 25 October, deal respectively with Dror’s own search for roots (My Fantasia) and the ambivalence of being a Vietnamese living in Israel (The journey of Vaan Nguyen). A discussion with the director himself will follow.

This year happens to be the 65th anniversary of the Farhoud, the pogrom which killed around 180 Iraqi Jews in 1941. It is also 2,600 years since Jews first settled in Babylon. Planned for November will be two evenings with the Iraqi-born broadcaster, Salim Fattal, who will be screening and discussing a documentary he made for Israeli TV on Iraqi Jewry.

Professor Ephraim Karsh of King’s College and author of a new book on the subject, will talk about the impact of Islamic imperialism on the Jews.

The programme, which is being run jointly with Spiro Ark, concludes with a Forum on Iraq’s minorities. Sunnis, Kurds, Turkomans, Assyrian Christians, Jews and Mandaeans will discuss whether the new Iraq will be safe for them.

The Harif programme coincides with an international campaign for rights and redress of Jews from Arab countries led by JJAC. Each family is urged to register online and record its story and any lost assets.

Last November, Harif – which was started in May 2005 – held a successful Jews from Arab Countries Week. Among the highlights was a lecture by Bat Ye’or, a Moroccan Henna and the premiere of the David Project’s film, The forgotten refugees.

Photo: scene from ‘My Fantasia’