Following the article on the first projected package tour by Iraqi-Israelis to Iraq, this Jerusalem Post reader speaks for many in her letter published on 30 December:

Sir, – I feel grave concern at what seems to me to be a very possible outcome resulting from the presence of a group of Israeli Jews, regardless of origin, in Iraq at this time (“‘Roots’ trip planned for Israel’s Iraqi Jews,” December 28).

In light of the many recent kidnappings of foreigners there, and their subsequently being murdered, a group of Israeli tourists in Iraq would not only be placing itself in danger, but Israel as well. The group could well become a highly sought after prize by Iraqi insurgents. After all, it is common knowledge that Israel will pay almost any price for the safe return of its citizens held by hostile forces in other lands.

I do hope our government will prevent these would-be tourists from making such a journey until it is deemed safe to travel to Iraq. If that is never, then so be it.

It had to happen sooner or later – 12 Iraqi-Israelis will be the first to pay a return visit to the land of their birth this spring and many more are rushing to sign up for future trips. For safety reasons, however, the intrepid pioneers will remain in Kurdish-controlled territory. Report by Orly Halpern in the Jerusalem Post. (With thanks: Soly)

“On the Tigris River: A Trip To North Iraq,” read the large pink sign at the entrance to the sixth annual academic conference of the Mosul Jewry Heritage Center in Haifa. Indeed, Iraqi-Israeli Jews who were born in the now violence-plagued city of Mosul will make a trip to Iraq to ‘return to their roots’ this spring.

This trip, promises the sign, will include visits to the grave of Jonah the Prophet [which is in Mosul], the grave of Rabbi Nahum al-Kushi of Mt. Sinai, the cave of Abraham our Forefather, and the grave of Noah (of Noah’s Ark).

The first trip is limited to 12 people, but many more have expressed interest, said Gideon Oved, 59, a member of the MJHC board, which is organizing the trip, headed by Aharon Efroni, the center’s chairman.

“We might make two trips back to back,” said Gideon Oved, a member of the center’s board. If all goes well, say the planners, there will be many more trips in the future.

Despite the bombs, the kidnappings, and the curses on their adopted homeland – Israel is widely believed by Iraqis in Iraq to be behind the US invasion and occupation of their country – Iraqi-Israelis are rushing to sign up.

“I’m going no matter what,” said Nahum Ballush, 72. “I want to go back and see the river, the Jewish quarter.” His voice trailed off.

For Iraqi Jews from the North of Iraq now living in Israel, the visit to the country they have not seen since they left some 50 years ago is an opportunity not to be missed – no matter the dangers. Over 120,000 Jews left Iraq during the early 1950’s. Those still alive are yearning to return to the sights, sounds, and scents of the place they loved and left before it’s too late.

The group will fly to Turkey and then drive by bus across the border into the Kurdish-controlled area of Iraq. There a Kurdish guide will join them. The trip is coordinated with the Kurds, said Oved.

Like Jews of other Arab and Muslim countries, Iraqi Jews feel a strong bond with their former patria. In Israel they congregate regularly, often at parties specially-organized for Iraqi Jews, complete with Iraqi-Jewish singers singing Arabic classics

The Muslawis – the Iraqi term for people from Mosul – are particularly tight knit. They are building their own center in Haifa, which will be complete in six months, and have regular events – both academic and social.

One such event took place Tuesday. Some 50 Maslawi gathered from across Israel at the Meridien Hotel in Haifa to attend the academic conference about themselves. The lecturers spoke in the local Hebrew language but filled their talks with stories from far away Iraq.

In between, people from the audience told funny stories in Maslawi Arabic – a dialect of the Iraqi dialect of Arabic or a combination of Hebrew and Maslawi.

Every lecture was peppered with stories of someone’s grandmother, the Jewish barber, or the Beit Midrash headmaster, who everyone knew.

Most of the attendants were well into their Sixties and Seventies and understood the Arabic. But some of those who attended were the children of Muslawis and had the elders translate for them.

A couple men wore knitted skullcaps but all prayed together before the lighting of the Hannukah candles at the end of the conference.

Meanwhile, it remains uncertain whether the trip to the Tigris will include a visit to Mosul, the city they want to see most. Mosul is outside of the Kurdish-controlled area.

President Ahmadinejad’s Holocaust denial is just the latest example of Islamo-Nazi revisionism. And Jews must document their presence in Arab and Muslim lands now – or find they will have been written out of Middle Eastern history altogether, argues Shelomo Alfassa of the International Society for Sephardic Progress.

“Historically, Jews and Jewish communities have existed in the Middle East, and the Gulf region for more than 2,500 years, long before Islam was conceived. Jews in substantial numbers resided in what are today Arab countries over 1,000 years before the Koran was written. However, unless Jews from Arab countries retroactively document every thing that was stolen and taken from them, including property, goods and real estate, the Jewish people stand the chance of having a pan-Arab denial that Jews ever existed in Arab lands. Anti-Jewish rabble-rousers such as the presidents of , and the Palestinian Arabs are moving towards the way of the American and European revisionists. They are quickly instilling in their youth the idea that Jews never lived in their lands. This is not conjecture; it is actually happening.

Because of this, international Jewish organizations such asJustice for Jews from Arab Countries is spearheading the documentation that Jews not only lived in countries governed by Islam, but that these same Jews had their possessions and fortunes confiscated. Securing rights and redress for Jews displaced from Arab countries is an issue that has not yet been adequately addressed by the international community. Many of the leaders of these countries are now on the verge of rewriting history, declaring that no Jews have lived in their countries. In fact, there were more former Jewish refugees uprooted from Arab countries (over 850,000) than there were Arab Palestinians who were said to have became refugees as a result of the 1948 war, when six Arab nations attacked the fledgling State of Israel.

“There is a moral and legal imperative to ensure Jews from Arab countries assume their rightful place on the international political and juridical agenda, and that their rights be secured as a matter of law and equity. The statement by the president of that the Holocaust did not happen is more than a cause for alarm; it is a call for action.”

President Ahmadinejad’s remarks rejecting Israel may be rooted in centuries of Iranian antisemitism, forced conversions, pogroms and the Shi’ite perception that Jews were ritually ‘unclean’. Dr Andrew Bostom, author of the Legacy of Jihad,set out the facts in this article in Front Page Magazine in 2004, three years after Ayatollah Khatami had threatened the Jewish state with nuclear annihilation.

“An ethos of Jew-hatred, including paroxysms of annihilationist fanaticism, has pervaded Persian/Iranian society, almost without interruption (i.e., the two major exceptions being Sunni Afghan rule from 1725-1794, and Pahlavi reign, with its Pre-Islamic revivalist efforts, from 1925-1979), since the founding of the Shi’ite theocracy in 1502 under Shah Ismail, through its present Khomeini-inspired restoration, “he writes. “Having returned their small remnant Jewish community to a state of obsequious dhimmitude, Iran’s current theocratic rulers focus their obsessive anti-Jewish animus on the free-living Jews of neighboring Israel.”

On the other hand, it can also be argued that the Iranian people are out of step with their mullahcracy, that Israel and Iran had excellent relations for 30 years and that many Iranians are sympathetic towards Israel.

JTA News – A group that is pushing for restitution for Jews who fled Arab countries wants to preserve Jewish sites in the Muslim world.

Several members of the French branch of Justice for Jews from Arab Countries, which met on 19 December in Paris, said the group should focus on registering Jewish sites as historical sites with UNESCO. The group, convened under the guidance of CRIF, the umbrella group of secular French Jewish groups, outlined several broad aims: to remember the Jews who came from Arab/Muslim countries; re-establish historical truth concerning ancient Jewish communitities existing in Arab countries; and collect testimony regarding the conditions under which Jews lived in Arab countries and which led them to leave these lands.

The group will work with several other French Jewish organisations to promote the culture, history, memory and politics of Jews from these areas. 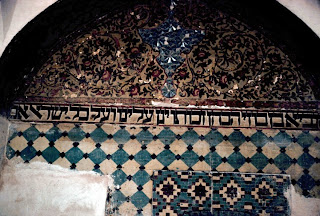