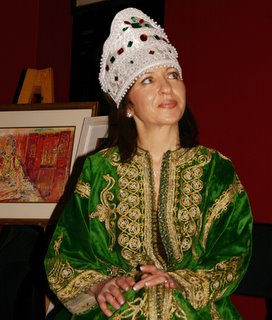 The petite but feisty Egyptian-Jewish historian Bat Ye’or lecturing at the heart of the British establishment, the sight of ladies queuing to have their palms daubed with henna dye, and the Rivers of Babylon ensemble intoning Iraqi-Jewish melodies at the Sephardi Centre– these were some of the abiding images of the Harif Jews from Arab Countries Week, which ran in London from 14th to 20th November 2005.
More than 700 attended the week-long festival, the first ever run by Harif, a new association of Jews from the Middle East and North Africa. The association has as its purpose to promote the history, culture and heritage of Mizrahi Jews.

On Monday, to an audience exceeding 150 at the Royal Institute of International Affairs (Chatham House) Cairo-born Bat Ye’or, the pioneer historian of the subjugated status of Jews and Christians in the Muslim world explained the concept of Jihad, which has pitched Muslims into a state of war against non-Muslims through the ages. It was only when the Muslims were weak or Jews and Christians were too useful to them that these became ‘protected’ or ‘dhimmis’ under sharia law. Islam needs to reform its jihadist ideology if we were to see the end of the political Isalmist violence rampant today. Dr Patrick Sookhdeo, the director of the Barnabas Fund which defends persecuted Christians, emphasised that we must differentiate between individual Muslims and Islamist ideology.

On Tuesday 50 people had to be turned away from a packed Leighton House, the atmospheric home of a Victorian artist fascinated by the romance of the East. During a pre-nuptial henna ceremony organised in conjunction with Spiro Ark, Mo and his son Shalom Garson sang Moroccan wedding songs, while Bettina Caro (pictured) wore the bride-to-be’s dress and headress and Katya Silver explained the symbolism of the ceremony itself. Daphna Sadeh and her Israeli group the Voyagers played exotic melodies.

On Wednesday, Sara Manasseh and her ensemble, the Rivers of Babylon performed Iraqi-Jewish music to an appreciative audience of 90. All enjoyed an oriental supper featuring dolmeh, tabbouleh and baklava.

On Thursday, Dr Irit Abramski, a specialist from Yad Yashem, revealed the little-known tribulations of the Libyan Jews during the Second World War. She explained that had the Nazis not been defeated by the allies, it was only a matter of time before North African Jewry would have suffered the same fate as European Jewry in the Holocaust. British nationals were deported to Bergen Belsen. Seven hundred Jews died of disease and starvation at Jado camp in Libya, while Tunisian Jews underwent six months of hell during the Nazi occupation of the country.

On Saturday, the Iraqi-born novelist Eli Amir held his 100-strong audience spellbound by his lecture ‘Longing and hope’ at Imperial College , interspersed with readings from Amir’s books by the Israeli Arab actor Nayef Rashed. The lecture was organised jointly with Spiro Ark. The transition from old to new home was a painful one, full of disappointments: Amir’s own father entertained the impossible dream of growing rice in the Galilee. The refugees from Iraq always longed for the land of their birth, yet hoped for a better future in Israel.

On Sunday at the Screen on the Hill Eli Amir joined David Littman, the historian and campaigner for refugee rights at a discussion chaired by Jeff Barak, managing editor of the Jewish Chronicle, to talk about the new American film, Forgotten refugees. Almost 200 watched and applauded the film, which is only second ever made to focus on the neglected stories of the Jewish refugees from Arab countries.

Flushed with its success the Harif Committee has plans for further events next spring, such as a food festival and a screening of films at the French Institute. See website www.harif.org for details.
Photo of Henna evening bride by Ruth Corman