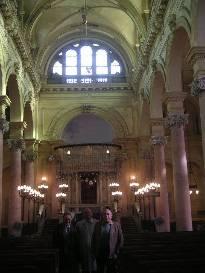 A campaign to preserve Egypt’s Jewish heritage by the Nebi Daniel Association, a group of Egyptian Jews living in Britain and France, has met with consistent stonewalling by the Egyptian government.

The group is named after Alexandria’s magnificent Nebi Daniel synagogue (pictured), the only one still ‘active’ in a city where there were once 14. Its members are trying to plan for the day when the 34 elderly Jews still living in Cairo and Alexandria are no longer around. As well as aiming to ensure that cemeteries and synagogues are maintained, Nebi Daniel wish to centralise and secure the future of the community’s records. It is vital for Jews of Egyptian origin around the world to be able to access circumcision, marriage and death records for geneaological, religious and civil purposes.

The Egyptian Jewish community once numbered 80,000 but fled for their lives, most in 1956. “Unless the records are saved,” says Yves Fedida of Nebi Daniel,” people will only remember the Jewish community by decrepit cemetries and buildings, not as human beings with histories, names and faces.”

The stranglehold maintained by the Egyptian authorities has led to theft: ‘commando-style raids’ by visiting Jews snatching documents or tearing out pages pertaining to their relatives.

Nebi Daniel have met top Egyptian civil servants and officials and have been treated with the utmost courtesy. They are asked to put their requests in writing, but an answer is never forthcoming.

Efforts to retrieve Sifrei Torah – the Nebi Daniel synagogue in Alexandria has 70 crammed into its Ark – have been similarly stymied. A law classifying any object older than 100 years as an antiquity prevents ancient Sifrei Torah from being taken out of the country. There have been only two instances when this rule has been broken: on one occasion the visiting foreign minister David Levy asked an Egyptian official to allow him to take a Sefer Torah with him back to Israel. The official turned to the Jewish community head. The Jewish community head nodded. The official agreed. Later, the community head had his knuckles rapped.

Why should Nebi Daniel even bother with this thankless task when Egyptian Jews have rebuilt their lives elsewhere?

Yves Fedida’s answer is simple: ” You get to a stage in your life when you want to reappropriate that part of your identity that has been brutally taken away from you.”