In case you are wondering what the Algerian Kabyls have to do with this weblog the answer is that the Kabyls, like the Jews, are engaged in a parallel struggle for human and political rights. Nowhere is the affinity between these indigenous non-Arab groups clearer than in a talk given on 27 May at the French National Assembly by Ferhat Mehenni.

Ferhat Mehenni is a well-known singer in France and a spokesman for the movement for Kabyl autonomy. A year ago, his 19-year old son was stabbed to death in a Paris street by an Islamist who had mistaken him for Ferhat. The killer is still at large.

According to Ferhat Mehenni, a sector of Algerian and especially Kabyl society refuses to be taken in by the all-pervasive Jew-hatred put out daily by the Algerian media. This Jew-hatred is the instrument for a kind of political and intellectual state terrorism which it is very dangerous to oppose. Oppressed in the name of Arabo-islamism, the Kabyls have been known to try and draw international (and Israel’s) sympathy for their cause by expressing support for the Jewish state.

In December 2001 Mehenni himself witnessed a demonstration in the Kabyl town of Tizi-Ouzou against the arrest of a few Kabyl activists. Some young demonstrators being filmed in front of the town hospital were shouting as one voice:”Djich, chaab, maa-ka Sharon!” – “the army and the people are with you, Sharon!”

A daring move in an ‘Arab’ country. If Israel is a useful scapegoat for the Arab masses, it is also an excellent Trojan Horse for legitimising Arab dictatorships. Israel is associated with the Kabyls in order to legitimise their repression and prevent their emancipation. The average Algerian now sees the Kabyls as the new Jews and Kabylia as another Israel. Mehenni’s article (in French)

More than 1,000 Israelis, mostly of Tunisian origin, headed for the island of Djerba on Thursday on a Jewish pilgrimage to the oldest synagogue in Africa, the Ghriba.

Another 300 had cancelled their trip when the private Tunisian airline Karthago decided not to run direct flights from Israel.

The pilgrims came via Malta, Turkey and France. Visitor numbers are up since 2002 when an Al-Qaeda attack on the Ghriba synagogue claimed 21 lives, 14 of them German tourists. Security was in evidence across the island, but particularly around the synagogue.

Agence France Presse reported that the Tunisian Jewish community had diminished considerably over the years from a peak of 100,000 to 2,000. Jews had left for France and Israel, but AFP did not say why.

Ariel Sharon, the Israeli Prime Minister, has been invited to Tunisia for a conference in November. Opposition groups have called for protest meetings in the last few weeks but these were banned by the authorities. 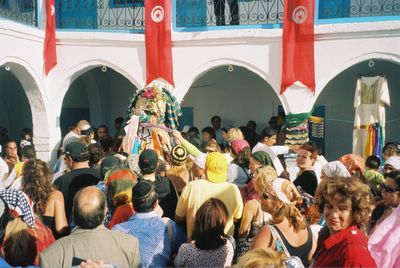 A Sepher Torah, encased in a Menorah and covered in silk scarves, is carried from the Ghriba synagogue to the Jewish quarter during the Djerba Lag Ba’Omer festivities. 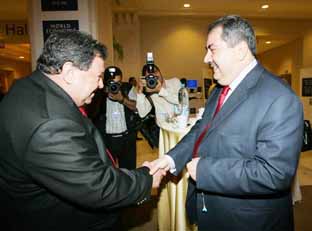 Israeli Minister of Infrastructure (left) Binyamin Ben-Eliezer (‘Fouad’), who was born in Basra, Iraq and came to Israel in 1949, shaking hands with Hoshyar Zibari, the Iraqi Kurdish Foreign Minister. The picture was taken a few days ago in Jordan during the World Economic Forum. (Thanks Iraqijews)

The French Catholic newspaper La Croix has been closely following the progress of some 130 Jewson a return visit to the town of Tlemcen in western Algeria. The visitors, the largest group to come back since independence, saw three former synagogues.

The Rabb (rabbi) synagogue in the street of that name has become a martial arts centre. A few Stars of David are still visible on the walls – a large one on the end wall. Large wooden seats with storage space for prayer books are used in a meeting room on the first floor.

In the next street another synagogue is today a library. The facade has not changed but the Stars of David have been scraped off. Ditto with the third house of worship, which is now a cultural centre. A quarter not far from the mosque is known as ‘derb el jihoud’ – the street of the Jews.

Some ten rabbis ministered to a third of the total population – some 10,000 mostly observant people, according to Abdelaziz Hamza-Cherif, a local cultural councillor.

Apart from its synagogues, Tlemcen is known among Jews as the site of the tomb of the 16th century Rabbi Ephraim Enkoua, one of the leading lights of Algerian Judaism.

Tradition has it that the rabbi, a refugee from the Spanish Inquisition, cured the Sultan’s daughter and obtained for his community the right to settle in the centre of the town and to build a synagogue. The community in Tlemcen dates back to this time. The visitors will go on a Hillula pilgrimage to the tomb, traditional at Lag Ba’ Omer. The tomb was restored on the initiative of president Bouteflika whose family came from this area. Not far is the cemetery which though unkept has never been desecrated. The pilgrims will try to locate their ancestors’ tombs.

AKRE, Iraq, May 24 (AFP) – Hajj Khalil is the last Muslim with Jewish roots in the Iraqi Kurdish village of Akre. One of his dearest wishes is to travel to Israel to apologise to his cousins for failing in his duties as a host when they visited him five years ago.

“In 2000, several of them came to see me and I didn’t even greet them, let alone invite them to stay. Despite the autonomy enjoyed by Kurdistan, Saddam Hussein had spies everywhere,” says Khalil Fakih Ahmed, a 74-year-old wearing the traditional Kurdish headdress.

In Akre, a large cluster of hillside houses some 420 kilometres (260 miles) north of Baghdad, near the border with Turkey, place names are one of the few reminders of the former Jewish presence.

The last Jews in the region left Iraq between 1949 and 1951, just after the creation of the state of Israel.

One block of houses is still called Shusti — or ’Jewish town’ in Kurdish — but the old synagogue was destroyed long ago.

In the mountains overlooking the town lies a plateau called Zarvia Dji (Land of the Jews) where the Jewish community used to gather for celebrations.

“My grandmother converted to Islam when her husband died and my father had just turned 10,” Hajj Khalil recalls, sitting in his garden with his children and grandchildren around him.

“When the Jews left, we stayed because we had become Muslims.”

But in the streets of Akre, Khalil and his family are still called “the Jews”. More